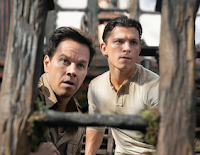 Mix all the best parts of Indiana Jones and Pirates of the Caribbean and you get a movie that tries too hard to be something it’s not. Perhaps if Johnny Depp and Harrison Ford visited central casting when Mark Wahlberg and Tom Holland read for the parts of Victor “Sully” Sullivan and Nathan Drake respectively this movie would have had the humor and charisma of its ancestors. Instead, we have a mashup that only sort of works. Or maybe if Steven Spielberg took the director’s chair away from Ruben Fleischer–move aside, buddy, let me show you how to make magic. In any case, this movie is based on a popular Playstation video game series. They may have been catering to a captive audience.

This may all be too critical of a film that has a couple of really intriguing ideas, but like our heroes’ quest in Uncharted, searching for a long lost multi-billion-dollar hoard of Spanish gold, the film drags its audience through an arduous archeological dig searching for those precious nuggets.

When you leave a theater so thoroughly entertained and engaged it seems only a few minutes has elapsed, the movie is a winner with a great script and believable characters. In the case of Uncharted, about twenty minutes could have been cut without losing anything. Instead, a few of the best comedic lines presented in the trailer were cut in editing. It’s great when there’s so much good material that the trailer teases without ruining the film, but it’s also a possible sign that the trailer needs to be better than the feature to attract an audience.

Holland and Wahlberg play a street-wise kid and a seasoned mentor, learning when to trust each other (never) and watching for the next betrayal. Maybe Holland is being groomed as the next generation of leading-man action hero, but he’s still too boyish to be convincing. And Wahlberg is hardly old enough to hang it up. Michael B. Jordan and Sean Connery would have been a better pairing if the latter was still with us.

If you like clever stories like The Da Vinci Code, with an unraveling trail of clues and plot twists, you might be willing to overlook Uncharted’s flaws. There are some spectacular action sequences, and like all good redemptive endings, the baddest of the villains gets hers the worst.

One quick aside: there is a thug whose Irish brogue is so thick he can’t be understood. It’s a great gag that could have been taken further.

And now for a few words about the female stars of Uncharted. Tati Gabrielle (Marienne from You) plays Braddock. Of course she’s beautiful and does her best fighting in tight leather pants. But she is consistently nasty and deserves her comeuppance. After all, she casually takes out Antonio Banderas, appearing here as the head of the Moncada family dynasty, a breath of fresh and convincing bad-guy air.

Sophia Ali (Grey’s Anatomy – Dr. Dahlia Qadri) plays Chloe, a habitual backstabber like her male co-stars, even after being saved by Nathan. Come on, Hollywood, stop with the white male savior stuff. She’s a capable bad-ass, not a damsel in distress. Also, have you noticed in movies, when characters drown they just spit a little water and are back in action in the next scene?

Another overused plot device is the leaping hand-catch, one character literally leaping from a ship to a helicopter where the pilot has left the controls, or jumping from a plane to a plummeting cargo pallet where someone holds on tight, at the last moment grabbing a hand and being pulled to safety. This would most likely rip the receiver’s arm from the shoulder. They are not flying circus performers, working with gravity instead of against it. Oh well, it looks good.

You could do worse than to see this movie (Jackass Forever or Moonfall.) But you can do far, far better. See my reviews of The King’s Man and King Richard.

at February 19, 2022
Email ThisBlogThis!Share to TwitterShare to FacebookShare to Pinterest 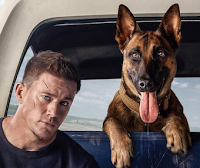 I can’t tell you how many times I’ve been mistaken for Channing (Magic Mike) Tatum. I can’t tell you because it has never happened. Even at my youngest and in my best physical condition, I didn’t look anything like this square-jawed, athletic male model. (But I am a half inch taller.) He is perfectly cast in this film, though his acting is a bit forced at times. But cut him some slack, he’s on screen with a dog.

Dog is Tatum’s directorial debut. He clearly had fun with the role of Briggs, a veteran Army Ranger suffering from a traumatic brain injury. His old captain will have nothing to do with his request to make a crucial phone call attesting to a full medical recovery, unless he goes on one final mission – bring an equally emotionally traumatized dog, Lulu, to the funeral of her recently killed “Dad,” Ranger Rodriguez. There is a Rodriguez subplot.

It is clear that Briggs has not fully recovered as we witness him routinely popping pills and experiencing a couple of seizures before and during the road trip. Parallels have been drawn between Dog and the movies K-9 and Turner and Hooch. Those are sillier films and don’t deserve the comparison.

Lulu is not a German Shepherd. She is a Belgian Malinois, (A Belgian Shepherd) allegedly the healthier of the two breeds, but not recommended for people lacking experience with dog training. The heavily muzzled dog is a beautiful animal, but terrifying to look at or interact with. But being an Army Ranger gives Briggs the courage and determination to complete his mission.

One caveat: the mission is scheduled to end after the funeral with Lulu being euthanized, deemed too difficult to handle.

This is a buddy movie on several levels. The Ranger allegiance to other Rangers, one veteran to

another, and ultimately two traveling companions on a road trip from Oregon to Arizona, with stops along the way to visit their respective “families.”

The opening song by John Prine laments, “How lucky can one guy get?” It’s a heartwarming introduction to the coming of age late in life by a guy who is the poster boy for how disastrous one guy can seem.

Carry some Kleenex for the end of this adventure. I won’t say any more. We hugged our dog when we got home.