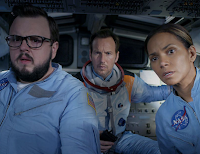 I apologize for not writing this in the car on the way home from the theater. Precious moments make a difference when trying to save readers two hours and the cost of a movie ticket.

That said, we have the worst film of 2022 in the can, and it’s only the beginning of February. I am going to spoil this movie in every way possible. If you can’t resist the tempting previews, go into it for the laughs, or perhaps as a drinking game (which would require viewing at home of course.) Terrible line – take a shot. Impossible feat of engineering – take two.

I can’t blame the actors for delivering horribly written lines. That should be pinned directly on the screenwriters. But Halle Berry is better than this, though she seems to have a track record of making bad decisions off screen. Her Oscar win for Monster’s Ball should have made Moonfall an obvious bad choice. Either the paycheck and starring role were irresistible, or she needs better representation. Did she read the script? Did her agent? Her character’s name is Jocinda Fowl. Really?

Likewise, Patrick Wilson as disgraced astronaut Brian Harper does an admirable job of working with a bad script. He’s a very recognizable face with a busy acting portfolio of films, but perhaps better known on Broadway. Here he’s piloting a little spaceship through the bowels of the Moon, like Luke Skywalker in the famous Deathstar scenes.

“Everything we understand about the known universe has just changed,” says Berry, straight faced. I laughed out loud.

“We have to kill this thing!”

A brief pause, then she picks up the cell phone on an Earth being torn to pieces. Somehow cell towers are unaffected. She then gives her four-star general ex-husband orders not to nuke the Moon. And he listens.

There’s an elapsed time problem throughout Moonfall. Events move from one to the next in jump cuts that could have merited making this an eight part limited series on Netflix. Instead, the audience is hurtling through space and time, much like the gravity-wave-generating Moon, headed out of its forever orbit toward Earth – in three weeks. I mean, let’s get right to it. And what is a gravity wave, other than a cool plot device for the graphics department?

At this point I have to mention that I know at least one real person who believes in a conspiracy theory that we left the moon and never went back because of aliens, referencing a two minute audio blackout that, of course, was a deliberate NASA cover up. I don’t know if they also believe that the Moon is a “Megastructure” built around a white dwarf star that serves as its engine, but I wouldn’t be at all surprised. Otherwise, why would the Moon be precisely the right size, and the correct distance from the sun to produce eclipses. Why? Tell me!

The special effects and video graphics teams had a field day with this film. It’s actually fun to watch in that regard, however stupid the reasons for what’s colliding, exploding and being sucked into space. This is simply a disaster film, and as 3D rendering has become more powerful, more ludicrous scenes are possible.

Eventually, running on two rockets (“It’s not possible!), the Endeavor space shuttle is retrieved, covered with obscene graffiti, from an L.A. museum and escorted to a launch pad by military vehicles that bulldoze anything in their way. This alone would take years to pull off in the real world.

Our hero, one of them, pilots the shuttle to the moon, then an orbiter/lander down a bottomless hole in a crater to the Moon’s hollow center (remember, it’s a megastructure), a spinning gyroscopic series of concentric rings that were home to an alien species, long gone.

The moon is defended by a morphing nanobot artificial intelligence, kind of a squid-like metallic malevolence. As Harper awakens in a scene reminiscent of the ending of 2001: A Space Odyssey, face to face with a holographic “construct” of his son as a child, he is told that, wait for it, the “aliens” were actually our ancestors, who created megastructures to populate the universe, but managed to create an AI that became self-aware and turned into Squid-bot, killing them all. Nice going, ancestors!

Enter our second hero, the reluctant astronaut, a chubby conspiracy geek with irritable bowel syndrome and crippling anxiety, who first discovered the Moon’s decaying orbit. He blows himself up, but is “scanned” and turned into another construct in the white-lit room. His cat, “Fuzz Aldrin” is with him – for eternity. And he’s excited about this.

Earth is saved. And ruined. But it’s a fresh start, and I’m so happy there’s no possibility of a sequel.