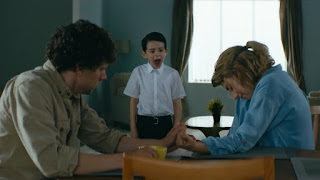 If ever there was a metaphor for the hopeless, isolated and trapped experience of pandemic confinement, Vivarium might be custom made. A vivarium is an enclosure prepared for keeping animals under semi-natural conditions for observation or as pets. But there’s a lot more going on here than meets the eye.
In brief, Vivarium is the story of Gemma and Tom, played by Imogen Poots and Jesse Eisenberg, who are exploring options for the purchase of a home. The showroom of a planned development called "Yonder" is their first and only stop. Following a brief and bizarre description of this “perfect” community, a robot-like salesman drives along with them to the model home at number nine.
The neighborhood is comprised of row upon row of identical homes, not unlike some gated communities here in Florida, or other more upscale versions we saw on the North Shore near Chicago. But these homes are utterly identical, all the same sickly shade of green inside and out, situated beneath subdued, somewhat artificial sunlight and motionless little clouds that look like something Bob Ross painted in the sky.
On the chance that you’re in the mood to see the most bizarre movie since 1982’s Liquid Sky, or 1979’s Phantasm, I won’t reveal the puzzle Gemma and Tom are forced to solve. Both of those older movies have cult followings, and this film might develop one as well. Those familiar with the RiverWorld science fiction series of stories might find this story intriguing. In that classic by Philip Jose Farmer set on a planet of endless rivers, people are reconstructed, naked and alone, mysteriously provided with food but with no clue where they are or for what purpose.
Written and Produced by Ireland’s Lorcan Finnegan, six production companies have their hands in this film. It is an international co-production of Belgium, Denmark and Ireland. Themes of materialism, happiness and purpose are explored by the writers in a full feature expression of their 2011 short called Foxes. Jesse Eisenberg plays his usual intense and serious persona.
One hint, pay close attention to an early scene in which a cuckoo takes over the nest of another bird. There are parallels. And you may find yourselves talking about this movie long after it ends.

at May 29, 2020
Email ThisBlogThis!Share to TwitterShare to FacebookShare to Pinterest

Meet Jibran and Lailani, smitten with each other and flashing that “I want to kiss you” face at every turn. Now fast-forward five years. The magic is gone, they are at each others’ throats, and just moments after they realize they have inadvertently broken up, the movie begins in earnest. A random event embroils them in a one-night attempt to clear their names of a crime they did not commit.

This brief synopsis serves as a metaphor for my experience viewing this film, having so looked forward to it based on a very funny trailer. And then the movie let me down somewhat. The best laugh lines and sight gags were compiled in the preview. A couple of our favorites were dropped from the final cut and were not replaced by other lines. We found ourselves saying, “What about when he says…?”
So, that’s disappointing, but the movie is still a fun ride mostly because of the onscreen chemistry between Kumail Nanjiani as Jibran and Issa Rae as Lailani. They are a comic odd couple, a wonderfully diverse pairing by two actors both of whom currently have boiling hot careers. Rae is fresh off of The Photograph earlier this year, and Nanjiani is capitalizing on his trademark subtle Pakistani accent with the hilariously understated teddy bear delivery we loved in Stuber and The Big Sick. Rae served as Executive Producer of this film.
If looking for a reason for this film’s shortfall it might be best to blame the writing. Or perhaps the role shifting of actors, writers and producers resulted in deficits. It certainly wasn’t the fault of the two stars that mostly carried the film. The idea is sort of a rehash of 1985’s After Hours but lacks the Directorial prowess of Martin Scorsese. Perhaps Nanjiani should have been tapped for the writing assist he has provided in previous projects.
If you haven’t seen the trailer, see the film. If you have, adjust your expectations accordingly.
The Lovebirds (2020) runs 1 hour, 28 minutes and is rated R.
Should I see this movie?

at May 25, 2020
Email ThisBlogThis!Share to TwitterShare to FacebookShare to Pinterest
Newer Posts Older Posts Home
Subscribe to: Posts (Atom)