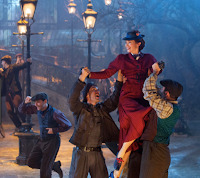 I honestly wasn’t looking forward to seeing Mary Poppins Returns. But now that I have, I almost feel as if I need to see the original again to review it fairly, given that I haven’t seen it in 55 years. But this is not a remake, after all. It’s the return of Mary Poppins, so it needs to stand on its own. And as I watched, I found that somewhat ancient memories leaped to the forefront of my mind like Lin-Manuel Miranda jumping from a ladder onto a cobblestone street.
When Disney gets it right, it’s as if they step into a time machine with all of the available current talent and technology and take a trip to the past. First, they made a stop in 1964, capturing the essence of the original film, then they took a trip to depression era London in 1910 to film live action. But of course, they didn’t, and I would love to hear the pitch some visionary made to suggest they make this movie. Is Mary Poppins still relevant in an era like ours, where special effects require that things blow up or fly at high speed around and through obstacles?
The sets look like they were borrowed from Disney’s version of A Christmas Carol, made in 2009. But wait, that film was made entirely with 3D computer generated imagery, so these sets are all new, real and beautifully done. Lighting in dreary London, especially by lamp light at night must have been a huge filming challenge. Darkness, fog and flame all integrate beautifully around choreographed lamp-lighters in a scene reminiscent of the rooftop chimney sweep sequence in the ’64 Poppins.
To avoid spoilers, I’ll skip details. The songs are new, catchy and delivered beautifully by Emily Blunt and Lin-Manuel Miranda. And I’m just guessing, but I wouldn’t be surprised if Miranda had a hand in the writing of at least one of them. Think Snow White meets Hamilton.
When the first animated sequence began my heart sank. I hate when 2D characters are superimposed over live action on screen, much like the dancing penguins in the original. But that’s just where it started, and within about a minute I was impressed by the seamless integration of the two media. I also realized that the blended approach was a necessary part of telling the story. Several minutes later it became absolutely stunning during a lengthy and intricate chase scene through an imaginary world. Don’t tell me how they did it. I just want to enjoy the magic of it all.
There are numerous clever and subtle nods to the 1964 incarnation of Poppins. Short musical phrases, spoken statements, images and of course, several cameo appearances that are really special.
Emily Blunt is perfect as Poppins. She’s a talented singer, and as a British actress stepping into some very large (Julie Andrews) shoes, she nails the somewhat snarky personality of the flying nanny perfectly. Speaking of Julie Andrews, she does not make a a cameo appearance in this film. She was offered an unspecified role and immediately turned it down, not wanting to step on Emily Blunt’s shoes. Always gracious, that queen of Genovia. And if comparisons had to be made, there is something more delicate about Julie Andrews face. Side by side, they are both very pretty, but Emily Blunt has a subtle hard edge, perhaps caused by coming to grips with a monster that required absolute silence in her last role as Evelyn Abbott in A Quiet Place.
Lin-Manuel Miranda can apparently do anything. The Hamilton genius sings, dances, and raps his way through the streets of London with a suitable Cockney accent and a grin that betrays how much he’s enjoying this role.
When I saw that Meryl Streep was in Mary Poppins Returns I was disappointed. Can’t they make a successful film without her being in it? But she was almost unrecognizable, and did a great job with a truly quirky character called Cousin Topsy.
Take the family to see Mary Poppins Returns, no matter how loud the protests. The audience applauded when it was over. High praise for a PG rated film that runs two hours and ten minutes. It flew by, so to speak.
And if you’ve completely lost your inner child, perhaps you’ll like Colin Firth’s evil character. There’s always a thoroughly dislikeable villain in a Disney film. If you still don’t care to see it, well pish, posh, go fly a kite.

at January 21, 2019
Email ThisBlogThis!Share to TwitterShare to FacebookShare to Pinterest 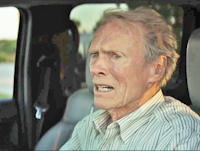