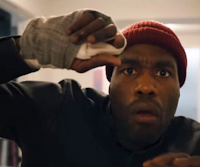 The multi-talented Jordan Peele is back with another great horror film, a sequel to the 1992 film of the same name. Chicago’s Cabrini-Green housing project is the setting for both films, though the area has gentrified following the tear down of the failed low-income housing experiment in 2011. Now we find loft-dwelling affluent residents who are unaware of the legend that grew out of racist violence in the past.

Those of us who grew up in Chicago will appreciate the locations used in Candyman. And in the 1970s,  if you ever wandered the wrong direction from Butch McGuire’s tavern, you quickly found you had left one of the nicest areas in the city and arrived in one of the worst.

Anthony McCoy (Yahya Abdul-Mateen II) is an emerging artist living with his socially savvy and successful girlfriend Brianna Cartwright (Teyonah Parris). Anthony’s quest for a new artistic direction takes him down a rabbit hole of local legend, where he inadvertently summons forth a mirror-dwelling monster and, in a conversation with his mother, discovers the truth about his own past. Of note is that Vanessa Williams plays Anne-Marie McCoy in both films.

Jordan Peele has mastered the horror/suspense genre, breaking out of his predominantly TV niche, as actor, director and writer, with his award winning Get Out in 2017, and the much anticipated Us in 2019. Candymanemploys the same dark cinematography that feels throughout like something is about to happen. The musical score is intense, but not disruptive. Throw in the effective plot device in Candyman – will they say his name five times? – and the edge of your seat finds you to be a frequent visitor.

Peele attempted a reboot of Rod Serling’s Twilight Zone series that I found somewhat disappointing. Serling’s shoes are impossible to fill, especially as the narrator. The new stories lacked the impact of the originals back when audiences were more easily shocked and surprised. But Peele’s film work is where he’s hit his stride.

Paper shadow puppets are used in Candyman to convey some back story elements, including the history of grad student Helen Lyle, whose role in the first film bridges into the subsequent tale. This is a graphic and bloody ninety minutes worth seeing if you can’t get enough of that. I’m feeling the need for a more uplifting movie, though the Halloween season is directly ahead, and it appears Michael Myers is back with Jamie Lee Curtis once again.

at September 01, 2021
Email ThisBlogThis!Share to TwitterShare to FacebookShare to Pinterest

My first question when we saw this movie was, “Is Samuel L. Jackson in every movie coming out of Hollywood?” It seems that way, and a quick check shows that he’s been in no less than twenty films in the last five years, with more in production. He’s one busy actor!

Here he stars as “Moody,” alongside Maggie Q as Anna and Michael Keaton as “Rembrandt,” in a film about, well, I’m not really sure how to describe it without spoiling it, but there sure is a lot of shooting, fighting and killing. The characters are all bad guys, going after other bad guys, a few of whom report to a generic off-screen Mr. Big who pulls their strings and of whom everyone is afraid. There are several plot lines. One is Anna’s origin story, with flashbacks to Viet Nam. Another evolves as the movie gets underway, probing the relationship between her and Moody. But the main story has to do with the mysterious identity of Mr. Vohl (Mr. Big.)

I’ve struggled with Michael Keaton as an actor ever since he turned from Mr. Mom into Batman. Comedians often make great actors. The comic persona that masks their inner turmoil can also be tapped into for great acting inspiration. In this role, Keaton is a mild-mannered, skilled psychopath who spends time laying out his opponent’s options and chances for success. And as hard as they try to ignite some on-screen chemistry between him and Q (so what’s her name, anyway? It’s Quigley,) it’s just not convincing. Really, you’re interested in this 70-year-old who’s trying to kill you and who just spoke the dumbest line in the movie? (I won’t give it away.) There was lots of body double work for Keaton's part.

One note, the stunt that involves the main character plunging several stories down into the atrium of a building using a firehose as a bungie cord has been overdone.

The unsmiling Anna is a bit hard to accept as the world’s greatest assassin. She’s sort of scrawny and lacks the physicality of Charlize Theron or Lucy Liu. But she’s something of a superstar in Asia, and here broadens the stable of available Asian actors as Hollywood diversifies.

The Protégé held my attention, despite some really curious camera work at times, low steady-cam shots that were dizzying and served no purpose.

Director Martin Campbell has a lengthy portfolio of occasionally successful films, including Vertical Limit, Goldeneye and Casino Royale. I don’t think this one will earn him any honors.