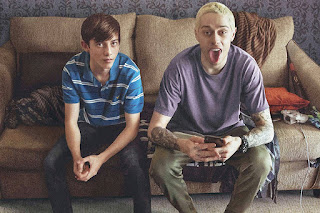 We’re running out of movies that aren’t horrifying or disturbing, so we searched for lighter fare. Pete Davidson is funny, but we should have known that his own dark side would feature prominently in Big Time Adolescence. After viewing this occasionally humorous but deeper coming of age story about twenty-three year old Zeke and his high school buddy Mo we found ourselves wondering if there was more to this film than a casual viewing reveals.

You have to go back beyond Superbad to find a possible genre match for this movie. It is certainly a twenty-first century “smart kid/dumb parent” movie, the origins of which go back to Ferris Bueller’s Day Off. In fact, if a remake of that classic is ever made, 17 year old Griffin Gluck who plays Mo looks quite similar to Allan Ruck, Ferris’s friend Cameron back in 1986.

Zeke is a heavily tattooed, drug-using post-high school slacker who at age seventeen becomes friends with his girlfriend Kate’s adoring nine-year old brother. That’s sort of creepy but is generally overlooked. Zeke cannot keep a job, but exudes confidence and has tons of advice, all wrong, which he gives our freely. As a result, no boy gets the girl in this movie, it is continually proven that girls are smarter than boys and it becomes clear that Zeke is only a legend in his own mind. At one point the easily impressed Mo tells a classmate that Zeke invented the party they were attending. She wisely responds, “You mean he invented hanging out in basements?”

Writer Jason Orley freely admits that Big Time Adolescence is his life story. Teaming up with Executive Producer Pete Davidson brought street smarts to a character written as a Midwestern Jewish kid in tight jeans. The concept of “hotboxing” – getting stoned in a car filled with smoke with the windows rolled up, was a Davidson contribution.

Zeke and Mo mirror each other, past and future selves the sum of which equal less than a whole. If this were simply a buddy film, the two characters would have complemented each other, each playing to the other’s strength. At the end of the day, Zeke has the kind of life that’s fun to visit but you wouldn’t want to live there. He lives in the house he inherited from his grandmother after his parents died and where he is failing to become an adult. He understands the high expectations and adult consequences society places on him but waves them off and uses Mo as a younger extension of himself.

Hip Hop fans will recognize Machine Gun Kelly (Colson Baker) as Zeke’s friend Nick, whose real life energy is tapped for the drug fueled circle of pals Mo has come to admire and hang out with. Here we have Davidson at age 26 and Kelly at age 30 playing much younger parts. This is probably symptomatic of their own delayed maturation, though both are no doubt quite rich. Peter Pan anyone?

Zekes’s claims are transparently false to Mo’s parents. As his Dad says, “You know how I know Zeke didn’t make a podcast? Because he didn’t.” Mo begins to see Zeke as the on ramp to his own road to ruin. On a break from his fast food job, Zeke claims to have written a movie script. Well, at least he wrote it in his mind because, “Writing it down is the easy part.”

As the film begins to take a turn into the plot for Risky Business, Mo is called out of class by the school principal and a police officer. They know he’s been selling drugs and want to know where he got them. He refuses to rat out Zeke, covering for him and accepting a stint of community service. The film leaves us wondering if Mo has outgrown Zeke, realizing it’s time to move on.