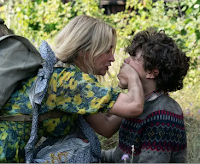 We were welcomed into the theater with promotional videos featuring Salma Hayek and John Krasinski, thanking theater goers for returning to the big screen to see their respective films. That felt both very welcoming and somewhat sad, as if we’re all castaways being slowly reintroduced to society. Adding to the out-of-a-coma feeling were trailers that advertised, “Coming in October of 2020,” or other long overdue dates. These reminders of our emergence were poignant and somehow personal. This is the second re-opening of Regal Theaters, and we can only hope that it’s for real this time.

But we are returning on Day 474, and in that respect, the one year break we endured waiting for the sequel to A Quiet Place felt oddly appropriate. We share so much with the Abbott family, having been isolated and pursued by a mostly invisible and menacing horror. Things have improved for us, but not for them, not at all.

Krasinski reprises his role as Lee Abbott, but only for the duration of a flashback to “Day One.” Emily Blunt and the kids are all back, enjoying a tranquil summer afternoon when all Hell breaks loose. We get to see how the alien invasion begins, and how suddenly things turn south. Just as suddenly we join the family in their current attempt to survive, tip-toeing through fallen leaves that crunch dangerously and into the arms of “people not worth saving.” This is a modern-day War of the Worlds.

I’m not going to spoil anything by saying that the alien and human monsters in the film all have four limbs and a penchant for destroying human life that defies understanding. Of course, the small family does the expected worst thing possible, they split up, allowing scene-shifting directorial fun for Krasinski and his editors, and audio engineering pluses that alternate between the silence of Regan Abbott, the deaf daughter, to the super-sensitive hearing of the sound-seeking monsters. We get a good look at the monsters in this outing.

Each character in the film struggles with an inner psychological conflict if not an outward, physical one, the overcoming of which carries individual plot lines through the film. Sets are post-apocalyptic, the remnants of humanity reverting to barbaric genetic memory or leading tranquil lives in hippie-like communes. Somehow, the lights have remained on for over a year, despite T-Rex/Raptor/Alien creatures running amok with the strength to shred train cars and buildings.

I counted at least three scenes that caused me to jump in my seat. The silence contributes heavily to the setup for these Hitchcock-like moments. This is a great sequel, worth seeing, but if you haven’t seen the original, by all means get it done before seeing number two.