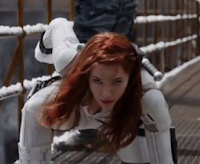 And neither is the Black Widow. She’s just an extremely skilled assassin, Natasha Romanoff, trained in Russia and a member of the Avengers following defection. Scarlett Johansson has played the Black Widow in nine Marvel films beginning with 2010’s Iron Man 2, and is finally getting her own feature.

I feel this almost could have been called The Black Widow’s Little Sister. Yelena Belova plays a role almost equal to that of the title character. This was a generous decision on the part of Executive Producer Johansson. Natasha’s Mom and Dad are along for the ride too, or at least people who pretended to be Mom and Dad.

One of the first surprises in the movie was the screenwriter's recognition that hero falls have been over used. They are a running gag, the source of some inter-character banter in a few classic Marvel moments of humor. The sparingly used jokes always lend some fun to these very numerous movies. And the Marvel Cinematic Universe (MCU) catalog is so extensive that some might be reluctant to dive into yet another origin story about a beloved character, but don’t hesitate.

David Harbour plays Alexei, the Red Guardian, a Russian super-soldier answer to Captain America, and Rachel Weisz has a role as Melina, his wife. Florence Pugh is little sister Yelena Belova. Yelena, Milena, Belova, Romanov, the names get a bit confusing, but don’t become a distraction.

at July 14, 2021
Email ThisBlogThis!Share to TwitterShare to FacebookShare to Pinterest

Take the leading actors from 2017’s The Hitman’s Bodyguard (Ryan Reynolds and Samuel L. Jackson), add Salma Hayek, Morgan Freeman and Antonio Banderas, and what have you got? Much less than you’d hope.

Hayek and Banderas have co-stared multiple times since Desperado in 1995, including voiceovers in 2011’s Puss ‘N Boots, Once Upon a Time in Mexico in 2003 and Oscar Nominated Pain and Glory in 2019. This film was a waste of their on-screen chemistry.

Ryan Reynolds has secured himself a one-man genre as a one-liner spewing action star, much like his character in the Deadpool franchise. He brings much of the humor to this film. Samuel L. Jackson is his usual F-bombing self, and Salma Hayek co-stars once again with her breasts. They are literally in a supporting role, commented on, fondled and used as weapons to lure bad guys. At age fifty-five she either has great genetics or they spent a fortune in makeup and post-production making her look much younger. It seemed she was competing with Jackson for most F-words, and I’d have to call it a draw.

There’s a ton of gunfire, explosions, car chases and fight scenes woven around a pretty ridiculous story with several subplots that add little to the whole. The reluctant trio set out to foil an angry Greek billionaire’s plot to destroy the EU’s power grid with a giant diamond encrusted Dremel tool and a USB drive full of viral computer code. By mid-film there are so many flavors of bad guys, mostly cliches, that it’s hard to recall how they all fit into the plot. This has all been done before, only better.