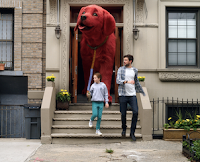 If you spent much time reading books to your kids (I hope you did), you likely included a few about Clifford, the Big Red Dog. First published in 1963, over 75 titles sold more than 129 million copies in 13 languages. The character also spawned a PBS series with the late John Ritter voicing Clifford.

In a nod to the late beloved author, Norman Bridwell, a main character in this movie is named Mr. Bridwell, proprietor of a somewhat mysterious animal exhibit in a tent that’s “larger on the inside” much like Dr Who’s Tardus. That’s where Bridwell, played by 82-year-old John Cleese, pairs Emily Elizabeth with an adorably animated little red puppy.

The animation of Clifford is amazing. Only occasional moments look unnatural, but the eyes, fur and most movements are those of a playful puppy, very reminiscent of my daughter’s English cream golden retriever, George, who is now a big white dog. Throughout the film I had to remind myself that the actors were interacting with something that wasn’t actually there.

So, the movie is cute and corny. As a PG film for kids, how could it be otherwise? But the action is almost non-stop, the topic of bullying is tackled head on, and the positive underlying message that it’s ok to be different strikes a much-needed chord of inclusion in these divisive times.

Darby Camp plays Emily. She’s been acting since she was a toddler and already has an impressive little portfolio, mostly in TV appearances. Isaac Wang, as Owen, has a secret crush on Emily and plays a cute as a button rich kid with some serious computer skills. His own resume is only two years old.

Jack Whitehall plays the scatterbrained uncle, Casey, left to babysit Emily just as Clifford arrives on the scene. The two of them try to hide, then contain, Clifford to no avail. And of course, a villainous corporate type wants to capture and study the giant dog to jump start his failing superfood company.

This is a deliberately silly movie, perfect after a steady diet of murder and mayhem that seems to permeate most current offerings. There were lots of kids in the audience, along with parents who explained much of what was happening, but clearly enjoying the chance to share in the fictional adventure on screen.

If you need some mind-candy, a break from the evening news, and a chance to step back a couple of decades and visit a big old red friend, this works nicely. The only way it could have been improved would be as a Christmas movie. Timing as a holiday release was already on their side.