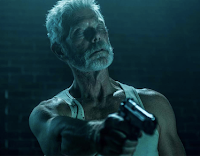 We did our homework last night, renting Don’t Breathe, a 2016 horror film about an elderly, blind war veteran who is seriously disturbed and quite skilled. The movie rests on the notion that in the absence of sight his heightened senses give him the edge, especially in the dark. Thus, don’t breathe! He’ll hear you.

In the first film, his home in a deteriorated neighborhood near Detroit is the target for a trio of no-good teens. After a series of profitable home invasion scores, they meet their match in the reclusive homeowner. The teens are unaware that the accidental death of his daughter led him down a Godless path to kidnapping, murder and rape. “The Blind Man” is a monster played by Stephen Lang, a respected actor with screen and stage credits going back to 1981.

Lang is back in Don’t Breathe 2 as Norman Nordstrom. Same guy, same neighborhood, different house. He has a name now, and we discover that he was once a Navy Seal. Other than a brief flashback to the previous film, this story is all new, and as is the case with many gore-filled sequels, taken to the next level of graphic violence. At least the victimization of women is no longer the backbone of the film. Or is it? The “woman” in this incarnation is eight-year-old Phoenix, played by twelve-year old newcomer Madelyn Grace. Nordstrom trains her to escape and outwit potential assailants, a sort of survival boot camp that keeps her isolated but not entirely imprisoned. Good thing, since a group of dishonorably discharged psychopaths are on the prowl and trafficking human organs.

If that sounds ridiculous, it is, but somehow it works and that’s a credit to the direction of Rodo Sayagues, returning here and building on what he learned with Evil Dead in 2013 and the first Breathe movie in 2016. He clearly relishes what I refer to as the pornographic gore and violence (PGV) genre. His signature cracked glass ceiling is back in this movie, probably because it’s such an effective audio and visual tension builder. Get-crack-off-crack-the-crack-glass-crack-before-crack-you-crack-fall. Oops, too late.

Overhead shots are another favorite, also functional framing devices likely created with the use of drones. Much of both films is shot in the dark, or simulated dark using filters and nicely lit sets. This immerses the audience in the blind protagonist’s world and is used to level the playing field when the power is cut or switched off. Smoke and fog lend additional eerie opportunities and a chance for silent pursuit to result in Norman emerging from the fog in well-lit over-shoulder shots.

But this film, like the eight films in the Saw franchise are not for everyone. Officially known as the “Splatter” genre, not to be confused with the “Slasher” genre more typically popular around Halloween, this is not for kids. So, imagine our dual horror, one because of what we were watching on screen, and the other due to the small children in the next row some loving parents decided to bring along on date night. The kiddies were plugged into tablet gaming systems so loud we could hear them through their headphones. And it is well known that kids never look up when told not to, so tonight’s outing should keep a therapist busy in a few years. Justice would have the parents reliving Don’t Breathe 2 nightly for a few weeks when the kids can’t sleep.