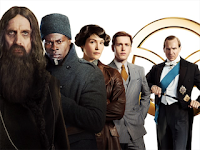 If you’re a fan of the evolving Kingsman franchise, be warned: this film is far more serious than the previous two features - Kingsman: The Secret Service (2014) and Kingsman: The Golden Circle (2017.) Those satires were raunchier, more graphically violent and had an entirely different cast, with Colin Firth in the lead role.

The latest adventure could accurately be categorized as creative non-fiction. It is also an origin story, depicting the creation of the Kingsman organization in the early 1900s, and establishing the Kingsman tailor shop as the entryway to their oh-so-upscale and super-secret headquarters.

I love bookshelves with built in hidden doors. I want one.

Ralph Fiennes plays the Duke of Oxford, a reborn pacifist forced to confront a promise made to his dying wife when she was caught in crossfire during a military skirmish in 1902. The Duke’s son Conrad witnesses her death, is protected by the Duke’s manservant Shola (Djimon Hounsou) and then sheltered by the Duke as World War I is about to break out. Conrad has other ideas. Ever supportive Polly, the Duke’s housekeeper (Gemma Arterton) serves as surrogate wife, potential love interest, and eventual founding member of the Kingsman.

Therein lie two powerful subplots in The King’s Man. Woven into actual events, populated by characters out of history books, the assassination of Archduke Franz Ferdinand in 1914 ignites a global conflict, cascading through events and personalities of the era. We soon meet Grigori Rasputin, the Svengali-like monk and manipulator of the Russian Romanov family. He is portrayed with wonderful creepiness by Rhys Ifans. Even Dutch exotic dancer Mata Hari (Valerie Pachner) has a blackmail role in the eventual decision by President Woodrow Wilson to enter the war.

This is one of those films that has you saying, “That was good!” upon leaving the theater. There was plenty of intrigue, was well-acted and had heart-stopping stunts and action sequences. So many films have been made depicting the real-life events and people threaded through this fictional script, we feel familiar with many of them, and yearn to crack open a history book to learn more.

Director Matthew Vaughn is already planning Kingsman 3 and a possible sequel to The King’s Man prequel. We’re wondering where he’ll take the King’s Men (and women), all code named after King Arthur and the Knights of the Round Table. Very fun stuff, and with this film, somewhat educational.