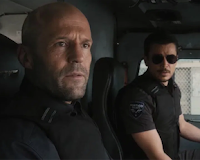 For my first time venturing into a post-pandemic theater I chose a film that wouldn’t require my full attention. That attention was compromised by the angst of sitting with a group of unmasked strangers, in some cases one behind the other, perhaps two feet apart. This was despite Regal Theaters’ best efforts to assign seating when purchasing tickets online. People just can’t do this simplest of things, like sitting in the seat they selected. Ah, well, at least the theaters may survive. We’re all itching to do something normal like go to the movies.

If you’re a fan of Jason Statham, this will satiate your blood lust and desire for revenge porn. The photo I chose for this review is of his biggest smile during the two-hour feature produced by Guy Ritchie. More on Ritchie in my reviews of The Gentlemen and Aladdin. He has proven himself to be a successful screenwriter and producer for an untrained high school dropout. He has a penchant for violence and appears to favor tight closeups, as if considering eventual viewing on a TV screen. He has a long history with Jason Statham, having launched his acting career in his late 90s release of Lock, Stock and Two Smoking Barrels.

Statham’s version of the unstoppable, almost super-heroic action star has him sauntering through scene after scene killing bad guys with ease and precision. He is clearly unhappy, and in Wrath of Man, that’s the motivating force behind his plot for revenge. He is a virtual Houdini, a zip-tied can of whoop-ass that keeps you on the edge of your seat because you’ve already seen him take out crews of inept armored car bandits and survive multiple gunshot wounds. He seemingly dusts off bullets like dandruff.

The script for Wrath of Man is initially quite weak, at least in the opening sequences when Statham, nicknamed “H,” applies and tests for a job as a driver at “The Depot,” the hub where Fortico Security’s armored cars return at the end of their pickups. It looks like home base from the TV show Taxi, and is populated by fellow drivers who all behave more like they’re in a prison yard than at work. New guys get viciously razzed, but H quickly applies his unsmiling, cold steel persona and has the boys wondering if he’s a dark horse. It’s a bit suspicious that he passes his entrance evaluation with exactly the seventy per cent required. He’s that in control, holding back and saving the good stuff for his first job. And that first job instantly lofts him to hero status at work.

Fellow drivers are also assigned goofy nicknames. “Bullet,” “Boy Sweat” and “Hollow Bob” are examples. The dialogue is juvenile and the banter is so over the top as to be ridiculous. But it does offer a couple of opportunities for mild laughs. There should have been more of those.

A missed opportunity is the presence of Dana, the lone badass girl driver played by Naimh Algar. She plays a relatively inconsequential role as H’s only love interest, a one-night stand solely for the purpose of interrogating her in the middle of the night at gunpoint. The role offered the possibility of a female costar with secret skills like those of Charlize Theron in Atomic Blonde. But I guess there’s no sharing the lead with Statham. But wait, who’s that handsome young bad guy, the baddest bad guy, following a convoluted layered onion of bad guys throughout the movie? Why, it’s Clint Eastwood’s son Scott, who made his screen debut in Daddy’s Flags of our Fathers in 2006. He’s not Clint, but he has a future on the big screen.

Wrath of Man is worth seeing if you like the Ritchie/Statham formula for violence and male dominated plots. It seemed a bit long at two hours, but that was in part due to the droning, ominous musical score that never abates and becomes sort of corny and distracting. All things considered, two better “Wraths” come to mind, like The Wrath of Khan or The Grapes of Wrath. Smile, Jason, smile. It will make you seem even more sinister. You’re fast, you’re furious. We get it.