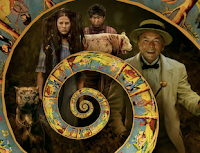 Warning: this movie is not for relaxed or more nightmare prone viewers. And to think we paid to see this thing.

I guess the film did its job within the horror genre. It was intriguing, but so relentlessly perverse and horrifying I worried about sleeping through the night without night terrors or bizarre dreams of my own. Ok, now I have your interest.

If you liked 2019’s Midsommar, you’ll love Koko di Koko da, so named because of a melodic and seemingly simple fairy tale with a haunting tune and creatures that literally haunt the two main characters in the film. Think It’s a Small World After All with attack dogs and psychopaths. After those two films I’m just thinking Sweden is kind of a weird place. Some characters in this movie are puppets, others are just deranged incarnations we initially see on a music box that plays the title song. That gift, given to a young girl on her eight birthday becomes the nexus around which the parents’ try to work through their grief and repair their marriage following an allergic seafood reaction that kills the girl and almost finishes off the mom. It’s kind of a combination of The Blair Witch Project and Groundhog Day, seasoned with Cabin in the Woods.

The film definitely leaves its viewers on edge, trying to figure it all out, and a bit tired from reading some rather rapid subtitles. Yeah, it’s in Swedish. Oh, and there’s a white cat.

The movie is directed by Johannes Nyholm and stars Leif Edlund and Yiva Galon, but who cares. We don’t know them and probably won’t see them again, though they all seem pretty busy in the Swedish film industry.

If you’re still curious you can find this movie on Amazon for $4.99.