The Sound of Metal 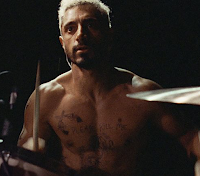 We might not have noticed this Amazon Original without a recommendation from viewers in Germany (Dankeschön!) In fact, the opening segment might have been off-putting, a documentary-like heavy metal musical segment from a band called Blackgammon playing an earsplitting track with a screaming vocal, incendiary guitar and intense percussion. I’m not sure if their sound qualifies as “screamo,” lacking perhaps the right punk influence, but the volume is way up there, and contributes to the story line.

But hang in there. Riz Ahmed plays Ruben Stone, a drummer who’s rapidly losing his hearing. A drug addict four years clean on the power of his relationship with Lu, played by Olivia Cooke, they tour with their band in a custom RV, supporting each other with healthy smoothies, exercise, dance and affection. This is after all, a love story, despite the tattoo on Ruben’s chest that reads, “Someone Kill Me.”

Ahmed is a British Pakistani actor, rapper and activist you might recognize from Four Lions, Jason Bourne and Rogue One: A Star Wars Story. He was listed as one of Time’s 100 most influential people of 2017 on the strength of a nomination by Lin-Manuel Miranda.

Cooke starred in 2018’s Life Itself and TV work including Bates Motel and Vanity Fair.

The audio engineering in The Sound of Metal immerses you in the experience of losing your hearing. Unlike so many films that have a character repeat out loud the sign language being used, the viewer is as initially helpless as Ruben, and you feel his depression and frustration, especially as a musician.

Following a recent ear infection I experienced a similar series of events shown when Ruben struggles to clear his ears and eventually sees an audiologist. But despite the time he spends benefiting from and contributing to a sequestered deaf community, the cochlear implant he chooses to fund with all of his worldly possessions is a brutal little procedure that he hopes will “fix” the problem that the deaf community doesn’t feel needs fixing. Embrace the stillness.

The Sound of Metal is thoughtful, well-acted and doesn’t resort to gratuitous sex, violence or cheap gimmickry.

Written and directed by Darius Marder, this project may be an important addition to his small portfolio.