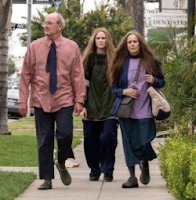 Richard Jenkins is one of those familiar character actors you just can’t place. Most recently he had a lead role in The Last Shift, a mostly overlooked pandemic casualty from 2020. He has an eclectic film resume that includes The Shape of Water, Step Brothers, The Cabin in the Woods, White House Down and many others. In Kajillionaire he is Robert, father to the strangely named Old Dolio played by Evan Rachel Wood, and husband of Theresa, played by the almost unrecognizable Debra Winger. We know Wood most recently from her lead role in the series reboot of Westworld.

These three are an essentially homeless family who wander through the streets of California looking for loose change, stealing mail and surviving day to day as career scammers. They rent office space attached to a business called Bubbles that oozes pink suds three times daily. They diligently scoop the foam from the adjoining wall in order to prevent damage and mold. Perhaps that value contributes to the owner’s tolerance of chronically late rent and unending promises of payment. Meanwhile, they live in superstitious fear of “the big one” and the electric power of frequent earthquakes.

Old Dolio has been raised more as a tool than a daughter. The family precisely splits the proceeds of scams three ways in a loveless business relationship. The parents only acknowledge 18 of their daughter’s 26 years, keeping her just short of adulthood, entirely dependent and constantly seeking emotional approval. Her husky-voiced, deadpan persona is that of a shell-shocked dumpster diver experiencing the world with a sense of forbidden wonder. Enter Miranda, an enthused random accessory encountered mid-heist on a turbulent airplane ride, and a possible casualty of her own parents’ dysfunctional relationship. Here the story takes on a new dimension as a love story that gives purpose and eventual resolution to the film.

This is a quirky low budget movie with an Indie feel, directed by Miranda July and with an Executive Producer credit by Brad Pitt. It showed up on a “best of 2020” list when searching for a movie to watch during our continuing theater blackout. It was $5.99 on Amazon, held our interest throughout and might gain traction once discovered.