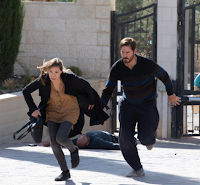 If “inspired by true events” is meant to suggest that you’re about to watch a true story, then labeling a food as “light” will help you lose weight.

So, no, Infidel is not a true story. And that’s good, because if the two main characters were truly as reckless as portrayed in this film a more appropriate title would have been “Imbecile.”

Doug Rawlins, a famous evangelical Christian blogger is invited by a friend to travel to Cairo to be a guest on a popular talk show. His wife Liz who works at the State Department warns him not to make the trip, double dog dares him not to evangelize while there, and then equips him with her seemingly CIA-like skills so he can send her a secret encoded message if necessary.

Doug is played by Jim Caviezel, the tall, dark and deadly Mr Reese, from the successful television show Person of Interest. He has also had his share of religious themed roles, as the apostle Paul and as Jesus himself in Mel Gibson’s brutal 2004 telling of The Passion of the Christ. In Infidel, his appearance on the Egyptian talk show goes smoothly until he turns to the camera and states, “Jesus IS god.” Until that point the audience was happily applauding Jesus as a teacher and prophet. At this point he initiates an international incident and his own kidnapping by Hamas terrorists. Fortunately, Rawlins is able to use his magic USB drive to get a message to Liz, but first he drops the drive within sight of his captors, and then a hacker on the Internet intercepts, decodes and posts the message. Out comes the power drill and Doug agrees to anything they want.

Not to be outdone, Liz Rawlins, played by Australian Claudia Karvan, throws on her hijab and travels to the Middle East to rescue her captive husband. She is alternately helped and harassed, stumbling through a series of chance encounters, eventually gaining the attention of Israeli agents from Mossad who need her help to liberate their own captives. A hint for married couples reuniting during a raging gun battle. Don’t stop for a loving embrace while hand grenades are rolling toward your feet. And if you’re going to pick up a live grenade and throw it at the bad guy, don’t think about it for a few seconds.

Some unbelievable sequences make for decent action and suspense, assuming you can suspend your disbelief. The film examines the very real topics of kidnapping and honor killing, which is Director Cyrus Nowrasteh’s intent. His own father was detained and arrested on a trip to Iran in 2013. Plenty of coverage on the evening news has focused on tragic events like the kidnapping and death of retired FBI agent Robert Levinson. Nowrasteh’s only other directorial credit during the last ten years is for a film called The Young Messiah, about Jesus from age seven as he grew into his religious identity. The film lost over ten million dollars worldwide.