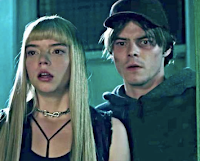 When a movie starts with the graphic flipping pages of a Marvel comic book I’ve come to assume it will be a top-notch film and an enjoyable couple of hours. So much for that theory.

This is an origin story of a handful of young “new mutants” who have been sequestered for their own protection by Doctor Cecilia Reyes, played by Alice Braga. The secret facility allows monitoring and guided development of superpower skills that put the mutants on a path to someday becoming X-men. This is obviously a world in which X-men are known and mutants are still feared and marginalized.

Problem one: they’re troubled teenagers. Problem two: the newest recruit (or prisoner) is Danielle Moonstar played by Blu Hunt. I think Blu Hunt is a better name than Danielle Moonstar but, oh well. She has the ability to materialize everyone’s worst fears. She is Native American and believes that inside every person dwells two bears, one good and one evil. The evil bear makes an appearance late in the film.

Charlie Heaton, recognizable from his work in Stranger Things, plays the Kentucky coalminer Sam Guthrie, whose powers cause a mine collapse that kills his father and leaves him with survivor’s guilt.

Anya Taylor-Joy plays Magik, an armor-plated, sword wielding bully with a bad attitude and a personal history with monstrous “Smiley Men.” Her strangely wide-set eyes feature as prominently here as in her recent portrayal of Emma in the movie of the same name.

The film spends far too much time on character development. The Mutants are discovering the limits of their powers, a convenient means of educating the audience as well. It seems we also need lots of convincing that Dr. Reyes is not a sweet, softspoken caretaker after all. Dani and her new buddy Rahne head off on a young lesbian love tangent, and the Smiley Men add a bit of Guillermo DelToro style monster horror. It should be horrifying enough that real life Marilyn Manson voices over one Smiley Man.

Eventually it is determined that Dani is too powerful to be controlled. Dr. Reyes receives some sinister instructions from an offscreen superior and the Mutants bond against a common enemy.

Originally intended to be the first part of a trilogy, multiple delays interfered with this film's promotion and release. It is now considered the thirteenth and final chapter of the X-men series even though the ending screams “sequel.”