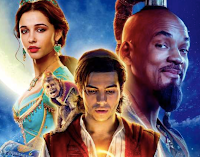 Here comes “The Summer of Disney” - but we have to wonder, with recent acquisitions, isn’t it all-Disney all the time?
The animated Aladdin was a fun family favorite in 1993. And the new live action release is no less engaging. But I have to get this out of the way up front and then move on: I miss Robin Williams. He brought his trademark energy and humor to the Genie character and was clearly the star of the show. Genie is Robin. Robin is Genie. A tough act to follow, and no doubt to cast.
Enter Will Smith and his computer enhanced blue muscles to do an admirable job in the central role, singing and seeming to really enjoy himself in an updated portrayal of Genie. As I’ve mentioned in previous reviews, the popular particle-smoke effect is used throughout the film when letting the Genie out of the bottle or putting him back in place. Many other transformative moments benefit from this multimedia effect.
This is a colorful romp through Agrabah, a product of a Middle Eastern folk tale that featured Aladdin in the One Thousand and One (Arabian) Nights. Directed by Guy Ritchie (Madonna’s ex), whose most noteworthy successes cast Robert Downey Jr. in Sherlock Holmes (2009) and a sequel two years later. Perhaps this is another attempt by Disney to develop a relevant base of directors in the wide net they’re casting. Or maybe they’re just spread too thin.
Whomever is in the Director’s chair, Disney films remain solidly Disney-esque. Villains are over the top evil and ultimately defeated. Boys get girls, lose girls, save girls, all while said girls are expressing their fierce and feminist natures. With a bit of courage, Disney could have named this film Jasmine. She’s the pivotal character, aspiring to be the first female Sultan of Agrabah, but she has to be literally swept off her feat on a magic carpet, convince Daddy and marry Aladdin to make it happen. The music has been nicely updated and a few new songs added.
The non-human characters deserve a mention. Abu is adorable, a typically wide-eyed Disney creature. The equally amazing animated parrot, Iago, is presented here minus the voice of Gilbert Godfried, which was core to the bird’s minion nature. Now he’s just a big-mouthed ordinary red parrot.
Marwan Kenzari plays Jafar, the power hungry Grand Vizier to the Sultan. Unfortunately his voice is an octave too high and makes him sound less evil than he should.
The sets of this movie are wonderfully over-stuffed Disney prop explosions that lead to a Bollywood dance sequence as the final credits roll. Fast motion was used during chase and dance scenes. Humans can’t move fast enough to keep up with the musical back beat. The colors are vivid, pervasive and a treat for the eyes. But I couldn’t help but feel that the designers were building sets that could easily be transformed into the next DisneyWorld ride. And of course there will be tons of merchandise.
Aladdin is played by Mena Massoud, an Egyptian who grew up in Canada. Handmaid Dalia is played by Nasim Pedrad, an Iranian born Muslim and a face familiar to Saturday Night Live fans during the years 2009 to 2014.
Frankly, Erin Moran and Scott Baio could have spun Joannie and Chachi into a Jasmine and Aladdin production. But the new stars are loaded with talent, particularly Naomi Scott, who sings up a storm while those around her are simply competent. She has an Indian mother and British father, a plate full of work and a long future ahead of her.
And then there’s Will Smith, known as the most powerful actor in Hollywood, among other titles. His is a long multidisciplinary career full of blockbuster performances and record box office grosses, awards upon awards and the ability to seemingly do anything. This was clearly a fun project for him.
Definitely see this on a big screen. Although a bit long, it’s a fun adventure for the whole family. Wholesome entertainment from the masters of wholesome entertainment.