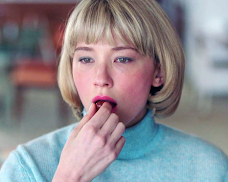 If you’re looking for a short movie reminiscent of Ordinary People or Good Will Hunting, this film shares a couple of themes with those longer, better known films. In all three the main character is in therapy, has an abusive or emotionally distant parent and comes to grips with demons, thus resolving a lifetime of struggle.

Now factor in a rape and the desire to eat dangerous objects and prepare to watch Swallow. Haley Bennett wonderfully plays Hunter Conrad, a sort of Stepford Wife to Richie Conrad (Austin Stowell,) heir apparent to the family business and a perfectionist who just wants Hunter to step up her game and behave. Richie’s parents are no help, supporting and increasing the pressure on Hunter to be everything their boy deserves. “Richie likes his girls with long hair,” quips his mother, suggesting that Hunter grow out her neatly coiffed short style.

Hunter journeys from family pressure cooker to therapy, through multiple hospitalizations and eventually comes face to face with an intervention that is in reality a forced voluntary commitment. “Sign here or Richie wants a divorce,” says Dad.

You might want to look up the medical condition called “Pica” before viewing. I thought this was limited to children or pregnant women who develop a taste for dirt, but it’s so much more and is quite disturbing. Here is a brief summary of what you’ll find online: Pica is a psychological disorder characterized by the desire to eat substances such as ice, hair, paper, sharp objects, metal, stones, soil or glass. Hunter seems to crave them all and creates a little display, collecting her trophies after they pass through her digestive system. This is delicately handled.

The problem is, some don’t pass through without causing internal injuries, and the resulting E.R. visits alarm the family, rattling their cages so to speak, and being control freaks, her cage most of all.

I won’t reveal anything further about the film’s outcome. Hunter’s journey with its betrayals, confrontations and awakenings is definitely worth watching. Director Carlo Mirabella-Davis’s own grandmother suffered from compulsive hand washing in the 1950s and is incorporated into the character of Hunter along with societal expectations of a happy, expectant mother. That and his experience as a “gender fluid” man who lived as a woman named Emma Goldman for four years in his twenties led him to say, “What’s interesting is that I don’t really know what I currently am right now, especially after directing this movie. Emma is always a part of me, and I’ve thought a lot about her over the years. It’s always a continual journey.”

Awareness of this background information elevates this film from a fictional story to more of a psychological study of the human mind with its malleability, vulnerability and ability to cope. I don’t know if the previously mentioned two films can make the same claim.

Swallow can be rented on Amazon Prime, YouTube and AppleTV for $4.99.