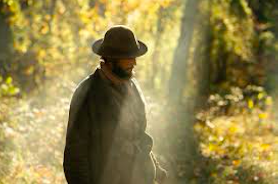 This is another potential casualty, at least on the big screen, of the Covid pandemic. We had trouble finding a way to watch First Cow despite good reviews and recommendations from friends. We finally resorted to watching it on a laptop through iTunes. We do not have an Apple TV and our ancient (four year old) Smart TV was just short of smart enough to cast this movie from a phone.

Despite those limitations, this beautiful film has an art-house feel, a simple story line and quiet, engaging dialogue between its two main characters. The feel is immersive, softly focused under the smoky forest canopy with audio engineering that brings to life every twig cracking under foot, the snap of a mushroom’s stem and the sounds of quietly chewing bites of biscuits. This contributes to an anxious experience for audiences who have been conditioned to expect sudden action on the heels of silence.

John Magaro plays Cookie, an expert East Coast baker accompanying fur trappers in the Oregon Territory during the mid to late 1800s. Verbally abused by a troop of surly mountain men, he remains a loner and spends much of his time searching for food in the forest. There he discovers King-Lu (Orion Lee), crouching naked in the woods, having escaped a group of pursuing Russians for having killed one of their members in self-defense. Keep in mind that this was a period of extreme racial injustice and mistreatment of Chinese immigrants. (Read Mark Twain’s Roughing It for more.) The ensuing friendship leads to an entrepreneurial arrangement that puts both new friends at risk. The actors turn in memorable, understated performances.

Eventually we meet the “first cow” brought to the territory by a wealthy landowner, who has a nostalgic craving for fine baked goods. Cookie and his new partner attract his attention at a sort of woodsy marketplace where they sell their biscuits, a memory-invoking Eastern treat in the remote frontier. The landowner’s insecurity with military counterparts and his vengeful nature factor into the plot as we approach the film’s subdued climax.

Director Kelly Reichardt, a Florida native, prioritizes atmosphere over plot and visual effects in her film festival entries, one of which (River of Grass) was called one of the best films of 1995 by the Boston Globe and others. The Academy Awards may seem overwhelming for someone who considers herself  “a pretty boring person” but if the awards are conducted virtually next year, First Cow may be a surprisingly perfect fit. At the very least it should receive nominations for sound editing and design.