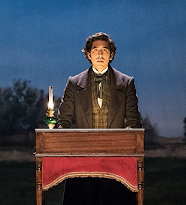 Those who may be mistakenly drawn to this film as fans of the magician David Copperfield will be disappointed. But as a huge Charles Dickens fan, it was a must see as soon as I heard it was released. It was also our first time venturing out to a theater since about February. I’m happy to report that the experience was safe and sanitary. Being virtually the only two people in the theater helped a lot. Contactless ticketing and concessions, masks, gloves, cleaning between features and social distancing were all in play.

So, a brief note about the magician we’ve unfortunately all come to know better perhaps than this classic character from Dickens’ own favorite and most successful book. Magician David Seth Kotkin changed his name to the Charles Dickens character David Copperfield because he liked the sound of it. The book is magical, but that’s about all the two have in common.

Dev Patel of Slumdog Millionaire plays David alongside several other memorable cast members. Not least of these, and a real treat to see them onscreen together, are Peter Capaldi as Mr. Micawber and Hugh Laurie as Mr. Dick. Capaldi is known primarily from his television portfolio, with 46 episodes as a recent Dr. Who incarnation, and Laurie we know of course from 176 episodes of House, sans English accent, and much other television work. The two could have easily exchanged the quirky roles they played in this film. Both were a delight.

This modernized take on Dickens’ enhanced autobiography is his own coming of age story. It takes us from his birth to middle age, with memorable characters and events that became fodder for his eventual writing career. The director explored young Copperfield’s brilliant and inquisitive mind dissecting and jotting down bits of idiosyncratic comments and capturing differences in dialect among those around him. Casting of this movie is interestingly diverse. Copperfield is Indian and several traditionally white characters are Black. After a very brief bit of confusion you settle right into the acting and accept the portrayal without regard to race, which is nice.

Perfectly cast as the character Uriah Heep is Ben Whishaw who has played everything from Q in recent Bond films to Melville in The Heart of the Sea and the voice of Paddington the bear. Critics have called him one of the best actors of his generation. He is a sniveling, falsely humble and insincere antagonist to the extreme. Those who think Copperfield is a magician may think Heep is a rock band. Nope, but great choice of name.

It’s been a long time since I read David Copperfield, but this movie makes me want to read it again. There are numerous comedic threads running throughout the story that make it a fun and richly British period piece set in the mid 1800s. The opening scene has an adult Dickens reading his tale to an auditorium filled with admiring listeners. For a brief period, the public speaking engagements of Dickens and Mark Twain overlapped. Amazingly, though Twain was a great admirer of Dickens, and they were once in the same room, they never met. What a dream it would be to hear either one perform.

One other note: the actual title of the book was The Personal History, Adventures, Experience and Observation of David Copperfield the Younger of Blunderstone Rookery.

The Personal History of David Copperfield (2019) runs 1 hour, 59 minutes and is rated PG.