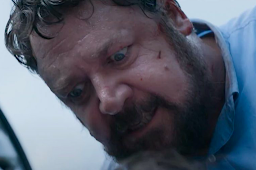 In Unhinged, an almost unrecognizably overweight Russell Crowe stars as a deranged assailant in pursuit of a young mother who honks at him when he fails to proceed at a green traffic light. Granted, she lays on the horn hard three times and he sits through the entire light. Road rage ensues, but quickly becomes something far more sinister.

Consider this film a cross between Falling Down and Duel. Although not all of the action is in vehicles, much of it takes place behind the wheel. A staccato tap, tap, tap, tap musical/mechanical score during a relentless pursuit accompanies the action, similar to Duel and eventually you expect Rachel’s station wagon to start smoking and breaking down, just like Dennis Weaver’s car did on a long uphill climb.

If Crowe gained a ton of weight for this script I feel bad for him. It wasn’t worth the pain and suffering he’ll endure if he wants to trim down. He does a great job of playing a deranged killer, but the script has numerous flaws, mostly in the frightened female victim’s logic. After so many recent films in which women leverage their strength, intellect and cunning it seems this script returns us to a time in which helpless females were victimized by a big, bad man, though she does have a plan thanks to her Fortnite-playing son.

Just a few of the lessons we learn between scenes of graphic torture and highway carnage:

1.     Control your emotions in traffic,

2.     Say you’re sorry convincingly, even if you don’t feel the need,

5.     A phone without a screen lock is asking for trouble,

6.     Call the police instead of trying to outwit a lunatic,

Caren Pistorius plays Rachel, the woman who drives a red station wagon with lots of warning lights illuminated. She allows her busy life to get in the way of her busy life, oversleeping and losing her biggest client, letting her gas tank run down to empty and other avoidable actions on a day when everything has consequences. Pistorius does the best she can with a somewhat corny script, but she just can’t seem to find a breakout film. This one surely won’t be it.

Director Derrick Borte has six unremarkable films to his credit in twelve years. The opening scene in Unhinged is solely for the purpose of establishing Crowe’s unstable, violent behavior, I guess so that we understand when he next “unhinges” we’ll know what he’s capable of doing. But when Michael Douglas comes unglued in 1993’s Falling Down, you almost feel for him. That one is a much better film.

The opening scenes in Unhinged are a compilation of news stories, some of which appear to be actual footage of our stress-filled and chaotic current events. This sets up the film’s premise but then takes it to a completely insane next level, sort of like Fortnite.

The anxiety first felt when Rachel is targeted eventually fades when her actions and those of her pursuer become clearly unreasonable. Reaction to Rachel’s decision-making border on those experienced in teen slasher movies where you find yourself asking, “Why is she doing that? No, don’t go alone into the dark kitchen filled with knives.”

This pandemic-delayed film is mercifully short and has an estimated budget of $33 million with global opening weekend receipts of $23 million. They may make money on this thanks to Crowe’s power to draw crowds.