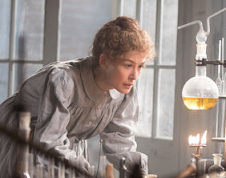 When I was in fourth grade I acquired a huge chemistry set from someone who had tired of learning science and gaining knowledge. Or maybe they set their basement on fire as I recounted here. In the set was a small black device that looked like the eyepiece for a microscope, or maybe a printer’s loop. I discovered that it was actually a spinthariscope, a toy version of a tool that allows a viewer to observe the nuclear disintegration of ionizing alpha radiation on a surface coated with radium or other phosphor.

The Gilbert Company, maker of the Erector Set, created the U-238 Atomic Energy Lab, parts of which had been combined with the chemistry set I enjoyed.

This is the long way into a review of a movie about Madame Marie Curie, but allow me to finish by saying that I still have my toy spinthariscope. Late at night, long after your eyes grow used to complete darkness, looking into the eyepiece reveals frequent streaks and flashes of green light that look like shooting stars. It’s definitely a “wow” experience, especially when you consider that these same particles are passing through your body without even slowing down – all day, every day for your entire life.

Polish born Marie Curie was a “wow” kind of scientist. This biographical Amazon original does an adequate job of telling her life story, and rather heavy-handedly makes the case for her triumph within and beyond a male dominated field during Victorian era Paris. In fact, she was the first woman to win a Nobel Prize, and the first person of either gender to win one twice. With her partner and husband Pierre she discovered Polonium and Radium and went on to discover X-rays that were used in the field to save the lives of soldiers in World War I.

The movie compartmentalizes her science, love life and feminism in a less than fluid script. Those times, like viewing old movies from the 1950s, induce cringe-worthy reactions to the behaviors and attitudes of her contemporaries. She was far ahead of her time, a brilliant, inexhaustible worker and mother to Irene, another Nobel Prize winning female in Chemistry for the discovery of artificial radiation. Sadly, Marie died of aplastic anemia, likely due to her long exposure to radiation.

As the wonder of radium became known to the scientific community it was popularized as a magical substance and commercialized in a bizarre variety of products ranging from toothpaste to cigarettes. On the face of watches and clocks “you could even say it glowed.” A brief series of actual product photos was incorporated like a Powerpoint slide show in a clumsy sequence at this point in the film. It felt like the director was a super fan of Curie, or maybe just not that great at directing. And indeed Director Marjane Satrapi has only five directorial credits in twelve years.

Rosamund Pike plays Marie Curie. She is best known for her Academy Award nominated title role in 2014’s Gone Girl. She captures the intensity and motivating self-righteous indignation that propelled Madame Curie beyond the accomplishments of her male counterparts. A scene in which she dresses down The French Academy of Sciences with the words, “Your understanding of this was wrong” is likely revisionist scriptwriting at a time when Curie was snubbed by the Academy for a seat that went to Edouard Branly for his work on wireless telegraphy.

If you have Amazon Prime you can do a lot worse than spend a couple of hours learning about an interesting historical figure. If you tended to daydream in science class, this is your second chance to learn about a pioneer of science. And since it’s a movie you don’t even have to read a book.