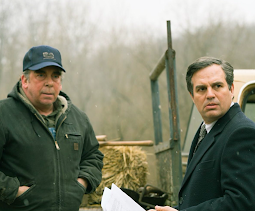 Mark Ruffalo plays real life corporate attorney Rob Bilott in this true story about Dupont Chemicals Company’s atrocious poisoning of the farming community of Parkersburg, West Virginia over a period of decades. Through a series of unlikely connections, Bilott exposed and brought to account the largest chemical company of its day.

The use of several actual characters from the community that were poisoned by Dupont’s blockbuster product called Teflon, lends the film additional credibility. One baby, born disfigured from the effects of “C-8” in the drinking water and on the production line where a number of pregnant women worked, appears as an adult late in the film.

This is not a wild ride or even that exciting, but throughout the film you hope for a happy ending for Bilott, whose marriage suffers, and for the residents of the town who come to blame Bilott for suing their largest employer. There is harassment of several key individuals and tension among the partners at the law firm where Bilott works.

The data mining done to ensure “medical monitoring” is guaranteed in the lawsuit sets a precedent for discovery, analyzed for over seven years and resulting in six key linkages to disease states with over 3500 victims. The final credits reveal that the chemical in question is now present in 99 per cent of Americans at some level, and it never leaves the body – a “forever” chemical.

Interesting stuff, frustrating to watch when power, money and greed align to get in the way of humanity and Bilott is left feeling that no one, companies, governments or agencies support the people. Only the people do.

Ruffalo looks bloated and soft spoken for this part, which we have to assume is appropriate. The story is well told, difficult at times due to the extensive covering up of information and what Bilott has to endure to sift through a deliberate burial in records reluctantly provided by the Dupont attorneys.

We watched this on Amazon Prime for $5.99. It’s another movie that we saw previewed before the pandemic and had planned to see in the theater. Well worth watching at home.