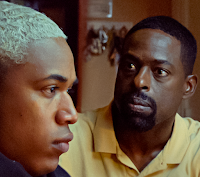 If you liked 1979’s The Great Santini this film might be one you enjoy. It seems that Sterling K. Brown is in danger of being typecast as intense father figures, and for this role he is perfect. But unlike his character in This Is Us, the loving father of the second generation Pearson clan whose type A angst turns mostly inward, the Waves character Ronald (no last name) is laser-focused on improving teen son Tyler. His pep talks are abusive, manipulative guilt trips steeped in racial insecurity and the need to “do ten times more” to gain equal footing with privileged whites.
Set somewhere in southeast Florida, near the mega-wealthy South Beach excesses of glitz, drugs and Art Deco Hip Hop, colors and music form an immersive backdrop for what is essentially a teen coming of age movie. Once again, Smartphones are a key plot device, if not a character, that are an end-run around the need to convey much information that would traditionally need to be spoken or acted out. As writers know, show-don’t tell. Performances are convincing, the script is gutsy, real and the in-your-face cinematography plays well on a home TV display. In a time of streaming and confinement, this is important though accidental. Writer/Director Trey Edward Shults did not see Covid coming.
So, as the Black Santini, Brown trains with his son, challenges him to an arm wrestling contest over breakfast in a diner and trash-talks constantly, belittling and apparently thinking he’s motivating his wrestler son into being the man Dad has become. A small but effective wrestling sub-plot has appeal to sports enthusiasts, but the motivation leads to a career-ending shoulder injury, drug abuse, loss of scholarship and a pregnant girlfriend Alexis, played by Alexa Demie. Demie is a multi-talented singer and actress currently involved in HBO’s Euphoria. All of this comes down very quickly, as does the subsequent series of scenes in which Tyler (Kelvin Harrison Jr.) unravels minute-by-minute and text-by-text. The results are disastrous and tragic, leaving more than one family shattered.
Taylor Russell plays Tyler’s younger sister Emily. She’s filling in her spare time while staring as Judy Robinson in the reboot of Lost In Space, which is surprisingly good. During the second half of the film, which could benefit from an emotional intermission, she becomes the focal point of the crumbling family. She is the shoulder upon which Dad, her boyfriend and Tyler have learned to lean, the Caretaker who appears poised for her own journey of potential self-destruction. She holds herself responsible at a pivotal moment in the film’s plot for something she was unable to prevent. Like most survivor guilt, she rewinds a mental tape and simply asks, “Why didn’t I act?” And in a far too simple cathartic outpouring side-by-side with her suddenly sensitive and emotive father, the director takes the easy off-ramp to an act three that, if not happily ever after, at least heads the family in a better direction.
Watching Waves sits you, if not on the edge of your seat, at least holding onto your arm rests waiting for something bad to happen. At one point our little group of viewers wondered, “What kind of teen party is that?” when the location shifted to an unsupervised multi-level mansion up-lit with glowing, colored lights, fountains and filled to overflowing with drugs and alcohol. But it served as a stage for flowing blood on tile and the arrival of red and blue stroboscopic emergency vehicle lights, of course set to music.
This movie is somewhat depressing from beginning to end. As a cautionary tale, it dismantles a wealthy family striving to extend their hard-won privilege into the next generation. And there, but for an unforeseen cascade of events beyond our control, like a pandemic, go we all.