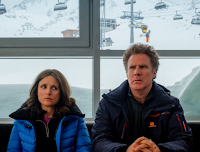 Comedians inevitably want to be taken seriously, if not in life then in dramatic film roles. And they are often quite capable. But I am quite happy queuing up a movie with comedic giants like Will Ferrell and Julia Louis-Dreyfus and expecting a light hour or so of quality laughter.
Warning: Downhill is not a funny movie. That is not to say the movie is devoid of humorous moments, but they are more of the uncomfortable, awkward situational variety than pratfalls and belly laughs you’d expect from man-child Ferrell or Seinfeld foil Dreyfus. After all, there’s skiing in this movie. You mean Ferrell doesn’t get tangled up in a lift or take an agony-of-defeat tumble down a black diamond run? Nope.
This is the story of Pete and Billie, a couple silently struggling in their relationship following the death of Pete’s father eight months earlier. Pete is in awe of his father’s memory, and uncomfortable assuming the mantle of family patriarch. A seemingly therapeutic family ski vacation to the Alps finds them welcomed by a sexually confrontational hotel concierge, a gigolo ski instructor and an avalanche from which Pete instinctively runs, leaving his family to be buried at their table during lunch. That sounds funny, but it isn’t played for laughs. From that event arise deeper doubts about the strength of the marriage, the father’s love of his two sons and both partners’ willingness to fully commit to each other.
This is a short movie that feels long, and $5.99 felt about right to view it at home. It is an American adaptation of the 2014 Swedish film Force Majeure currently streaming for free on Hulu. Julia Louis-Dreyfus produced the remake with directorial help from writers Nat Faxon and Jim Rash, whose 2011 The Descendants won them an Oscar for best adaptive screenplay. Zach Woods, who played Gabe in The Office, is at his awkward, unconfident best here, basically a redo of that character. Here he plays Zach, the submissive half of an adventurous young couple, traveling the world without a plan or a care, but with the aid of “shrooms.”
There’s a lot of talent involved in this production, but it feels somewhat amateurish. That said, the cast’s ability to make the audience squirm speaks to the effectiveness of the script and their delivery. Ultimately, this is a film about redemption and the ability to own a crippling shame. It is also about forgiveness.
If you’d like to save a few bucks, see the Swedish version. Or for a fun visit with your old comedy buddies, watch Elf or Seinfeld.