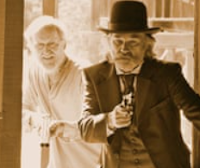 I love a good Western. This 2015 film popped up in our Netflix assortment recently and we gave it a chance. We’re now in treatment for PTSD.
The movie starts strong. Great sets and acting, some brutality early on, but nothing we couldn’t handle. The dialogue was punchy and had that formal-English dialect that wouldn’t be entirely out of the realm of possibility given the recent emigration during this period of most pioneers from the East Coast and beyond. Dark humor permeated early scenes, and then it just got deeply dark. Kurt Russell plays a no nonsense sheriff in ironically named Bright Hope near the border of Texas and New Mexico. He is known for his trademark shot-to-the-leg when confronting bad guys, resulting once again in the summoning of cattle rancher Arthur’s wife Samantha, who seems to have some medical expertise, or at least a bag of tools.
Samantha and two others are kidnapped by a rogue group of Native American cannibal Troglodytes early in the film. The subsequent rescue mission culminates with the most graphic, disturbing and horrific portrayal of Indian atrocities I’ve ever seen in a move.
At 2 hours, 12 minutes this unrated Western Horror (sparsely populated) genre entre will give you nightmares and should not be watched unless you can handle Saw or The Human Centipede.
Reactions: