Vix Flix Movie Review: Once Upon a Time in Hollywood 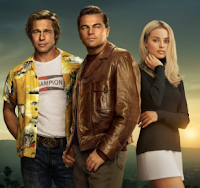