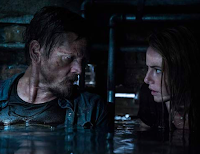 “Aaaah.”
“Nuhhh.”
“Gguh.”
“Ernnn.”
If you can hear above the sound of your own groans, these are among the distracting litany of sounds the star of Crawl can be heard making repeatedly throughout the endless alligator attacks in this fairly short, action-packed movie.
I credit the Director, Alexandre Aja (Pirahna 3D, The Hills Have Eyes), with some jump-out-of-your-seat scares along the way, much like the scene in which the shark in Jaws prompts Roy Scheider to utter the famous line, “We’re gonna need a bigger boat!”
Heading into this film, I thought it was about one crazy alligator. But no, it’s about an entire swarm of them! They’re all huge and intent on killing humans trapped in a decrepit house somewhere along the Southwest Gulf Coast of Florida, in a fictional town where a hurricane is about to burst a levee. There’s one problem. I’m only aware of one levee in the entirety of this region. All the rest are on the east coast or elsewhere. Minor detail.
Early in the film, a billboard along a highway packed with evacuees advertises “Alligator Farm.” Perhaps this is where the gators lived prior to escape. They seem pissed, and before long they’ve eaten two police officers and three locals trying to loot a store. There’s a lot of red water in each case.
So, a category 5 hurricane is bearing down on our heroine Haley (Kaya Scodelario) and her dad (Barry Pepper), who is familiar mostly from parts in Saving Private Ryan and Flags of our Fathers. He’s trying to save his daughter and not doing a very good job of it. In a mere ninety minutes he manages to have his arm bitten off, drown (Haley saves her dad with mouth-to-mouth and a couple of hard chest blows) and he is probably the source of the movie’s name, since a hideous compound fractured leg causes him to crawl at all times. Here we have a case study in the number of tourniquets that one person can self-administer and still survive.

“Named him after a man of the cloth…called him Amos Moses. Left arm gone clean up to the elbow…”I apologize, but Jerry Reed’s concept song from 1970 got stuck in my head about half way through the movie.
Kaya Scodelario got her acting start in three seasons of the reality TV series Skins, a show that hired teens with no acting experience. She later landed a part in Moon with Sam Rockwell, and has been building her resume with a trilogy of Maze films that sound suspiciously like Hunger Games in a variant of that post-apocalyptic genre. (Author’s note: I’ve never seen any of them.) In Crawl, she spends most of the movie wet and swimming through disgusting water. She is chomped on several times, once on the leg, once on the arm, and a third time in a death roll alligators are so notoriously fond of. Each instance would finish off a normal mortal. But Haley is a competitive swimmer with a relentlessly pushy father/coach who motivates her by suggesting she’s an alpha predator. A couple of corny exchanges ensue between father and daughter as they make amends while nicely animated alligators (actual alpha predators) are resting for their next scene.
In fairness, I must mention that I live along the Southwest Gulf Coast of Florida. It was kind of fun when US 75 was mentioned, since we take that highway most places. And having been through Hurricane Irma in 2017, I can say that the portrayal of hurricane conditions is pretty realistic, right down to the tree branch that comes crashing through a kitchen window. It doesn’t matter that I’m telling you this. It’ll still make you jump. And our stars being trapped in a basement full of other yucky stuff adds a creep factor in itself. One other point – houses in Florida generally don’t have basements.
We are also quite well acquainted with alligators down here. They frequent the canal behind our house, and during mating season they get a little weird, wandering down the middle of a street where I ride my bicycle. You get used to them.
But the reality is that gators are essentially afraid of humans. They are terrible chewers, preferring to attack small, bite-sized prey. So the scaly crew in this film is seriously demented. And that’s what makes this movie scary. They are survivors from a prehistoric age populated with monsters that eat living creatures. So our species has a genetic memory of these things always having been present. Good casting!
In summary, Crawl is scary, gory and pretty effective overall. But it is also a ludicrous survival story, periodically corny and loaded with distractingly dramatic music and less than stellar acting. Trust me, you won’t want to go swimming in Florida after you see this film, but I’d be more concerned about the shark problem in New Smyrna Beach.