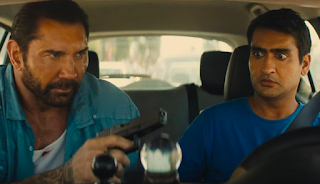 I’m going to say that this is the funniest movie I’ve seen since 2018’s unexpectedly hilarious Game Night, and then I’ll think about that some more and circle back.
Perhaps the woman in front of us at the ticket counter set the mood before the show even began. She simply said, “Two for Stubber please.” Revealing her complete ignorance of the concept and the associated pun was good for a laugh when we got far enough away to avoid being heard.
Previews for Stuber got our attention recently, and we chose to go see it despite mediocre early reviews from Rotten Tomatoes. Ok, so this is not an art film, but I suspect ratings will improve as more people see it. Fearful that all of the funniest scenes had been thrown at the trailer, expectations were not high, and the movie is short at just over an hour and a half. In a clever move, several very funny trailer sequences landed on the cutting room floor. They were no longer a factor. Could they fill the other eighty-five minutes with equally good bits?
Well, they did, and I believe we’re going to be seeing lots more from both Dave Bautista and Kumail Nanjiani. It’s not like they both haven’t been extremely busy with lengthy portfolios of TV and film work. But they have now costarred in a cop/buddy comedy with tons of antagonistic chemistry similar to DeNiro and Stiller in Meet The Parents,only ramped way up to another level (or maybe down.)
For those who haven’t been paying attention, Bautista is one of those insanely muscled professional wrestling stars like The Rock and other brethren in the current generation of Schwarzenegger-type heroes that seem to relish comic roles when not dominating the action/adventure genre. Bautista was barely recognizable as Drax in the two Guardians of the Galaxy films. As that shirtless and heavily tattooed alien he also managed to very competently deliver some extremely funny lines, all the while being much too intimidating a presence to be informed that the jokes were on him.
In Stuber, Bautista is once again the hero and the joke. But in this outing, he is relentlessly and boldly made aware of his failings by Stu, the meek and soft-spoken Uber driver played by Kumail Nanjiani. whose recent voiceover of “Pawny” in Men In Black International pretty much stole the show. And here we have him in human form wanting nothing more than to receive a 5-star rating while playing mellow 70s songs like “I’m not in Love” by 10CC on his vintage iPod. It’s going to be a challenge with his latest Uber passenger, Vic Manning, an aggressive cop partially blinded by recent Lasik surgery.
The plot, villains and outcome don’t really matter in hindsight. It’s the journey, the Uber ride and the outrageous bantering that carry the film. There are a couple of tangents to the Uber through-line involving Stu’s love interest and Vic’s daughter that provide the potential for redemptive sub-plots, but the evolution of Stu from hapless hostage to willing hero is the real five star ride here. There are lessons for Vic as well, but I won’t give those away.
Karen Gillan (Dr. Who, Jumanji) makes a brief appearance in Stuber. She has now worked alongside Dwayne Johnson and Dave Bautista. Is a pattern emerging?
Electric cars take a not so subtle hit when, (predictably) at the moment they most need it to perform, the battery quits and demands recharging. This is a primary fear of potential EV buyers, a sign of our times, and an effective plot device that we will hopefully someday look back upon, laugh and say, “remember that?”
And in a nicely handled race commentary, Stu candidly comments that being taken captive by Vic wouldn’t look great, “A white cop holding a brown guy against his will.”
Vic responds, “I’m not white.”
Stu begins to guess, “Black? Mexican? Jamaican, Columbian, Chinese, no not Chinese.”
We never find out what racial mix produced Vic Manning, but in Stu’s angry estimation, “It was all the ugliest people from all the races that got together and made you.” Only he says it more crudely.
So, getting back to the funniest recent films, I looked them up. There were some cute and funny movies in the past year, but Stuber has better comic writing, superbly delivered, especially by Kamail Nanjiani. And it was a pretty good action movie too.
There is lots of graphic violence, profanity and brief graphic nudity. Not for the kiddies.