If you loved 1986’s Top Gun, you’re also going to love Top Gun: Maverick. It’s essentially the same movie, albeit with a weaker soundtrack and a leading man who is 35 years older. Tom Cruise, at age 60 is aging well, here reprising his role as Pete “Maverick” Mitchell. His films are a showcase for his physicality, generally running at top speed as viewed from a distance or riding a super-fast motorcycle. He’s known for doing many of his own stunts. At age 60, his hair is too consistently dark, as if he fell in a vat of blacktop sealer. Some gray highlights, befitting of a sexagenarian, would look cool. Still, he’s one of the highest paid actors in Hollywood.

Sadly, the same cannot be said of Val Kilmer. The 62-year-old fell victim to throat cancer, resulting in the loss of his voice. Top Gun: Maverick carved out a role for him as a debilitated admiral Tom “Iceman” Kazansky, unable to speak, and near death. A nice poster size photo of the younger man is displayed at his funeral. (Kilmer is still alive, battling his disease.)

But will Cruise inevitably fall victim to the aging Hollywood hunk syndrome? Those who embrace aging lengthen their careers. He’s been deceptively protective of his 5’7” stature. That makes him short by most standards. So it helps that the U.S. Air Force dropped a height requirement for pilots in 2015. He still would have qualified, but on the end of the spectrum intended for female aviators. Co-star Jennifer Connelly, Maverick’s love interest, is also 5’7” so Cruise must be standing on a box for this shot: 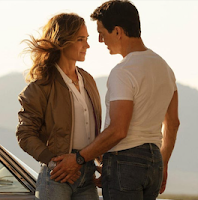 Connelly, at age 51, was only 15 when Top Gun appeared in theaters. Here she plays Penny Benjamin, a bar tender with a 13-year-old daughter who adds little to the script, but provides a foil for our aging hero. Penny understands Maverick better than he knows himself, and is often filmed standing quietly nearby with an all-knowing smile, or repeating the phrase, “Don’t give me that look,” even when walking away.

This film, like the original, takes place mostly in the air, or in Penny’s bar, where all the nick-named flying aces banter to the point of fist fights. They’re a competitive bunch, but are about to be pitted against each other to qualify for the top six spots in a real-life mission to destroy an Iranian nuclear production facility. It’s an impossible mission, one that will require “two miracles” to pull off. Maverick, reluctantly recruited as the crew’s trainer, intends to bring his crew home alive. Jon Hamm does a good job as his commander, and of course the perennial captain Maverick has a problem with authority.

The flying and dogfighting scenes in Top Gun: Maverick are spectacular. The 130-minute movie seems much shorter, some of which is edge-of-your-seat footage in the cockpit of several fighter jets.

One notion needs to be dispelled. Only missiles can travel at Mach 10, and that is a recent development. Maverick taking the “Darkstar” experimental prototype to that speed is a fantasy. The traditional about-to-pass-out G-force plot device is probably overused a bit here, but to good effect, and ejections at hypersonic speed are a death sentence.

Despite some moderately corny exchanges early in the film, the action and some underlying psychological baggage provide riveting intensity that make this worth seeing. You don’t need to have seen the original Top Gun, but I heard one movie-goer comment, “I’d like to see the first one now.”