The Unbearable Weight of Immense Talent 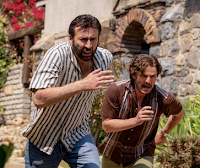 Attention Nicolas Cage fans: you must see this film!

Much of the fun in this film was lost on me because I’m just not a Nic Cage fan. But I realized what was being done, since with over 100 films to his credit it’s hard not to have seen at least a few of his movies, from The Rock, Raising Arizona, Peggy Sue Got Married and Gone in 60 Seconds to Con Air, City of Angels, National Treasure, Ghost Rider and Face/Off. And then there are the forgotten moments in his career like his brief appearance in the 1982 classic, Fast Times at Ridgemont High, where he went mostly unnoticed, until now. Here you go, from the scene in which a customer demands that Brad give his money back for an unsatisfying breakfast.

Starting with a long, awkward title, The Unbearable Weight of Massive Talent, the idea of Nic Cage playing a partially fictionalized version of himself was intriguing enough to merit watching. On and off screen, his antics and newsworthy intensity have captured fan attention for over forty years. He has the overacting tendencies of William Shatner, on speed.

Names are dropped and scenes from his career are reprised throughout the film as Cage is drawn in financial desperation to the home of a dangerous and wealthy superfan in Mallorca, Spain. He is offered one million dollars to attend Javi Gutierrez’s birthday party. A bromance ensues as Javi and Nic become embroiled in a real-life action adventure while they drop acid and brainstorm ideas for a movie they want to make together. This TurDuckEn effect layers film upon film upon film, and the biggest surprise to us as the audience is that it actually works.

And Cage is no stranger to celebrity worship. His obsession with Elvis led him to collect vast amounts of The King’s memorabilia, including a two-year marriage to Lisa Marie Presley. Javi is similarly afflicted, with a secured vault of Cage artifacts that is “impressive” according to the fictional Nick. A life-sized wax statue of the actor holding the two golden guns from Face/Off factors significantly later in the film.

The intentionally silly and self-deprecating beginning of the film endears us to the aging actor, so narcissistically out of touch with his wife and daughter it seems nothing can save the relationships. Enter Neil Patrick Harris as Cage’s agent with the birthday party offer. The timing of a lost movie deal forces Cage’s hand. He takes the seemingly easy million, determined to quit acting when the job is complete.

To the surprise of Tiffany Haddish and her partner, two CIA agents surveilling Javi Gutierrez, Cage’s arrival provides an opportunity to get eyes inside the fortress-like estate and recover the kidnapped daughter of a political candidate. From there the film spins into a series of Cage’s film references, with fawning fans dropping names of favorite films, eager to be near the action movie star.

Young Nicolas Kim Coppola, nephew of Francis Ford Coppola acquired the stage name Nic Cage in order to avoid being perceived as riding on the coattails of his famous uncle. In this film, the fictional character is named Nick, rather than Nic. A bit confusing, but not a distraction.

Eventually, the two aspiring film makers merge their hope for a “deeply human, character-driven drama” with a predictable action hero rescue of a kidnapped girl. The developing script begins to play out in an actual series of events that make for a pretty good thriller.

Two titles are named throughout the film as favorites of either Nic or Javi. They are Paddington 2 and The Cabinet of Dr. Caligari, a 1920 genre-defining classic exercise in surrealism that earned critical praise. By the end of this film I was curious to see them both.

The resulting movie has a bit of everything: car chases, undercover disguises, gun battles and frequent comic exchanges. Cage initially rejected the idea of playing himself and didn’t want to see the finished product. Recurring scenes in which he is lectured by “Nicky,” his younger self, a CGI masterpiece, cleverly reveal his inner struggles and become a vehicle for yet more memorable lines. After all, he’s, “Nick Effffffffffinnnnnnnnnnnnnnnnnnnn Cage!”