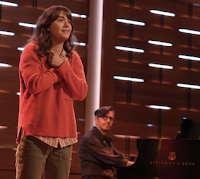 What would a film featuring deaf actors be without the queen of deaf actresses, Marlee Matlin? She won the best actress Oscar in 1986 for the film Children of a Lesser God. And here she is after a long career, in the film that won the “Best” award this year. Note that I don’t agree that this is the best film. It was good, but not great.

Kudos to the writers and producers for assembling a fine cast and story that honors the deaf. But despite solid performances and decent cinematography the script wandered in multiple directions, seeming contrived at times even to the point of being hokey.

But perhaps reality is a bit that way. We seldom pursue objectives on a singular path. Life gets in the way. In this case, the following subplots collide in the person of Ruby Rossi, played by Emilia Jones.

Her parents can’t understand her love of singing.

She works on the family fishing boat, struggling to make ends meet

She is shy, but loves to sing. A flamboyant choir director becomes her mentor.

Ruby wants to go to college. Her parents want her to remain part of the family business.

Her hyper-sexed best friend is hot for her brother. Not cool, friend.

A boy in her choir falls in love with her, screws up and is redeemed, then left behind.

This very un-subtle journey to a fairly remarkable ending is a vehicle for stuff we’ve seen before. Beginning to end, this is a showcase for American Sign Language, but as usual that requires subtitles and audible interpretation.

The setting is a typical roughneck fishing village, crews fighting over diminishing catches and “the man” who wants to monitor boats and control pricing.

Ruby runs out of her first audition, but winds up in the starring duet for the school concert. This all smacks of a very long GLEE episode, but despite a lovely voice she’s nowhere near that level of talent. In fact she spent nine months learning ASL, took voice lessons and learned to work a fishing trawler. And then she wound up in the year’s best picture. Go figure. Yay Emilia!

The most powerful scene in the film takes place during Ruby’s eventual audition for the Berklee College of Music in Boston. With alumni the likes of John Mayer, Quincy Jones, Donald Fagen and Al Di Meola, this seems a reach. But during her performance, with her family in the balcony, the film’s Director chose to go silent for a gut-wrenching thirty seconds. Here we are thrust into the silent world of the deaf. We hold our breath and ride it out. Sure, we don’t get to hear much of Ruby’s song, but neither do they. They are there supporting regardless. This is indeed the “Coda” of her journey. A wonderful play on words in a story about Children Of Deaf Adults.

A few laughs, some nice music and a tearful happy ending. That sure beats a slap in the face at the Oscars.

I remember just enough about Shakespeare to wonder if this movie was based on Hamlet. After all, a young prince vows revenge for the death o...