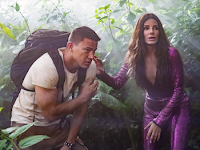 If you’re a fan of Sandra Bullock movies like Miss Congeniality (1 & 2) and The Heat, you no doubt appreciate her mastery of physical comedy. The Lost City combines that talent with the action of recent treasure-hunt adventures like Jungle Cruise and Uncharted. The treasure-seeking genre seems to have hit bottom, and most attempts fall far short of Indiana Jones and leave you feeling as if you’ve seen it all before. The comic element here adds life to an otherwise repetitive story, but is it enough? It may be, since the film is filled with great comic lines.

Bullock plays reclusive action-romance novelist Loretta Sage, five years the widow of a real-life adventurer, on a reluctant book tour with her cover model Dash McMahon, played in a Fabio-like wig by Channing Tatum, who also does a good job here being funny and self-deprecating. Enter Daniel Radcliffe as crazed billionaire Abigail Fairfax, in a role that is certainly not his first break from Harry Potter, but you still find yourself thinking, “Oh, that’s Harry Potter.” Fairfax has a fragment of script in a lost language that is key to the location of a fabulous artifact, a red crown of some sort. He believes only Loretta can translate the text, so he kidnaps her and whisks her away to his archaeological dig in the jungle (The Dominican Republic) – The Lost City.

If humor isn’t enough, then cast Brad Pitt and Channing Tatum for the ladies, get Channing naked and put Sandra’s face about six inches from his naked bottom half, front and back while she removes leeches that are turning him into a “blood Jamba Juice.” It is reported they had to repeat this scene about fifty times because Tatum couldn’t deliver a line without laughing. Pitt, when asked by Bullock, “Why are you so handsome?” replies, “My father was a weatherman.” His time on screen is short, killed off while rescuing the kidnapped author from Radcliffe’s jungle compound.

Bullock spends most of the film in a “glitter onesie” that she complains is “giving me a wedgie, front and back.” The clingy jumpsuit is covered in red sequins that leave a breadcrumb trail through the jungle, and is mostly form fitting except that Bullock has gotten so thin it appears baggy at times, and her ribs can be seen in the low-cut front. Eat something Sandra! Somewhat sadly, she must be fighting the battle of many aging Hollywood actresses, despite her natural girl-nextdoor prettiness. Botox has given her mouth the occasionally awkward appearance of having come from the dentist. But Sandra, in the Producer role clearly enjoys being cast alongside hunks like Pitt and Tatum. Recall she was once married to Monster Garage host and badass Jesse James.

If you prefer Bullock’s serious side, like Unforgiveable, Bird Box and The Blindside, this is not the film for you. She has quite a range. This is her movie, but she shares nicely with Tatum. As action rom-coms go, this one’s a hit.