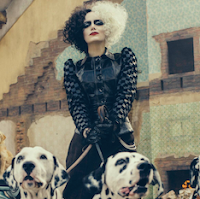 The first thing to be aware of is that this is not a remake of any version of 101 Dalmatians. That was done in the 1996 live-action version with Glenn Close in the title role. A screenplay by John Hughes merits a second look at that incarnation of the 1961 children’s book of the same name. An attempt at a very unnecessary sequel resulted in 102 Dalmatians, also starring Close, a domestic box office money-loser and the reason there was no 103 Dalmatians. Close is behind the scenes in this latest Disney feature as an executive producer.

This is a prequel, the Cruella Deville origin story. We get to meet her as Estella, a troublesome young girl genius with very strange hair and an innate gift for design. We find out where the name of her evil alter ego originates and are introduced to several dalmatians that either have a very long lifespan or are easily replaceable. They return later in the film.

Two Emmas later (Stone and Thompson) we enter the world of high-fashion design dominated by The Baroness, a truly heartless character reminiscent of Meryl Streep’s Miranda Priestly in The Devil Wears Prada.Once we flash forward to the adult Estella, the movie begins to feel a lot like the Prada story line, and according to my movie-watching wife Jeanne, there are tons of really cool dresses to be seen.

I was more focused on the “Baduns” from 1961, still named Horace and Jasper, and here reluctantly evolving from Estella’s crooked cohorts to Cruella’s henchmen. They are bumbling thieves, but far more likeable than their cartoon version. Their little dog Wink almost steals the show. He is a Chihuahua with an eye patch and a big attitude. Buddy, Estella’s dog is cute too, aging from an adorable pup to a scruffy sidekick, always in key shots paying attention to humans and scampering through crowds at parties. 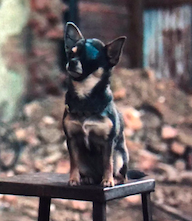 Another character that caught my attention was the Panther De Ville, a classic luxury vehicle that was used as Cruella’s car in all three live action films. It is reminiscent of the Excalibur, produced in the 1970s, and it made me flinch to see it used in high-speed chases through the streets of London. I assume the resulting damage was CGI.

There are secrets revealed throughout the somewhat lengthy two plus hours film. The childhood segment went on a bit long, as did Estella’s transformation during the emergence of her wicked inner persona. A hint of kindness surfaces occasionally, which puts The Baroness in the true role as this movie’s ultimate villainess. Does Cruella have a heart after all?

Both Stone and Thompson do a fine job. This was a fun movie, and there’s nothing to prevent taking the kiddies, though you might find yourself explaining that when good doesn’t triumph over evil, sometimes less evil triumphs over more evil. It’s a Disney movie, after all.

The setup for a sequel is firmly cemented during the final scene. Stay through the credits!