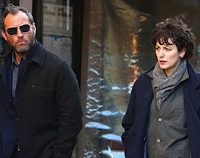 It’s difficult to judge audience enthusiasm on a Monday night, especially when the audience is comprised of two people, including my wife and I.
If Blake Lively was hoping to jumpstart her lagging career, this won’t be the ticket. In The Rhythm Section she plays Stephanie Patrick, a top-of-her-class Oxford student whose family changes plans to include her on a vacation, with disastrous results. The plane crashes, killing all on board, including the father of two children who occupied her unused seat.
Wallowing in guilt and grief, she proceeds to self-medicate with drugs and prostitution. You know, the usual choices. A journalist who has dedicated himself to researching the accident discovers that the plane was bombed, and he is closing in on those responsible. He just needs Stephanie’s help, but it is never really revealed why. What he has uncovered is a sinister human cocktail of terrorists, information brokers and bomb-builders, some existing only as shadowy code names like U-17. Didn’t Olivia Newton John sing about that? Or was it B-17? It doesn’t matter. The journalist’s source is known only as “B.” Even he recognizes that Stephanie has become a human cliché.
If this doesn’t sound ludicrous and contrived yet, imagine a Rocky Balboa-like sequence in which Jude Law (B) bullies and manipulates Stephanie through a training program that fashions her into an Atomic Blonde who lacks any real skills. At one point she strips to her underwear and walks into an icy lake to prove how tough she can be. Shiver harder Blake, you don’t have any goose-bumps. But she’s smart, resilient and desperate for revenge. And “B” is an ex-MI6 agent whose wife was murdered by one of the bad guys involved with the plane incident, so he has ulterior motivation.
The movie begins with a relatively unimportant scene in Tangier, and then flashes back eight months earlier to the beginning of the tale. During a handful of transitional scenes we are treated to a rather bizarre series of tunes, like when Stephanie, who has now adopted the identity of a dead assassin named Petra, marches off to fulfill her latest contract hit to the song “It’s Now or Never” by Elvis Presley. If this was an attempt to do something artistic, it came off more like a junior high school film project.
Sterling K. Brown does a nice job as a villain in his role as “Serra,” very unlike his This Is Us character. Reed Morano directed this forgettable film. We’ll be satisfied with his work on The Handmaid’s Tale. And the producers of the James Bond series can now return to their previous assignments.
Despite a warning from B to Stephanie that success in this quest is “not worth it,” she and others who provide financing for her escapades seem pretty satisfied with the results. So, don’t go looking for messages of redemption or forgiveness here.
The Rhythm Section (2020) runs 1 hour, 49 minutes and is rated R.
Should you see this movie?