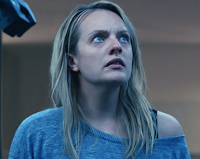 I have long been a fan of HG Wells, whose writing at the end of the nineteenth century including The Time Machine, The Island of Doctor Moreau and The Invisible Man established him as the father of science fiction. The latter of these novels chronicles the random and irresponsible violence of a scientist named Griffin, whose research into optics and the refraction of light allow him to become invisible. The classic 1933 film starring Claude Rains employed bandaging to reveal the location of the unseen main character. Special effects have advanced a bit.
So it was with delight in high school English class that I dove into my copy of Invisible Man only to find that it was the Ralph Ellison 1952 novel about individual identity among African Americans of the day. It is a great book, but not what I was expecting.
There have been several remakes of this film, but the current release of The Invisible Man is a great reboot of the Wells concept, starring Elisabeth Moss in a role so reminiscent of The Handmaid’s Tale you’ll wonder where her red dress and white bonnet have gone. She seems to be accepting very similar roles in which she is oppressed by tormenters and control freaks, reduced to a teary-eyed and hopeless state only to emerge with a can of whoop-ass and deliver herself from bondage with her now classic self-satisfied Mona Lisa smile.
Blumhouse Productions has firmly established its creep-factor reputation with a portfolio of such movies as Glass, Get Out, The Purge and the upcoming, controversial The Hunt. They have a talent for generating edge-of-your-seat tension through the use of human monsters, seen and unseen, that are relentless and ubiquitous.
If you’ve seen the trailer, you’re aware that Moss (Cecilia) has attempted to escape from an abusive marriage with a super-rich and ingenious inventor of a method to stalk her even after his alleged death. Cecilia doesn’t buy his suicide for a minute. “This is what he does,” she argues repeatedly. Her brother-in-law reluctantly serves as executor of the late inventor’s estate, granting five million dollars to Cecilia, unless she commits a crime or is judged mentally incompetent. And that’s where this sinister game begins.
Cecilia’s husband is Adrian Griffin (another connection to the Wells original) played by Oliver Jackson-Cohen. He’s done lots of TV work, including Emerald City and The Haunting of Hill House. His brother Tom is played by Michael Dorman, the soul-less assassin from the Amazon Original Patriot. Aldis Hodge stars as Cecilia’s police officer friend and protector. He’s most known as Noah from Underground, but also from What Men Want, Straight Outta Compton and an episode of Black Mirror among many other credits.
And that’s where I’ll stop spoiling the many highly calculated plot twists that lead to the film’s eventual climax. Let’s just say, there’s no red garment here, just a little black party dress.
The special effects are good, and the science believable. Of course, web cams and cell phones are important supporting cast members, similar to those we’ve come to embrace or revile in our culture.
Filmed primarily in Australia and written and directed by local boy Leigh Wahnnell, who has successfully made the jump from acting to directing, the use of tight camera shots and darkness heighten the fear factor throughout The Invisible Man. Cecilia spends a lot of time looking over her shoulder, and the audience gets caught up in the search for signs of an invisible predator, often without success. The experience verges on interactive.
One Easter Egg: the code Cecilia punches into a security system is 1933, the year the original film was released.