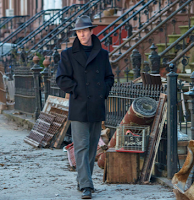 I once had an egg cream in the Empire State Building’s main floor diner. I went to the observation deck, an open-air fright fest that I recall being cold, cloudy and windy. I later looked back over my shoulder from street level at the World Trade Center on a gloomy day and snapped a picture that had no meaning until I rediscovered the image many years later. And that is the extent of my knowledge of New York.
I am also not a fan of jazz or of the noir genre of film popularized after World War II.  And I can’t say that I’m a particular fan of Edward Norton but am becoming increasingly fond of his work. Honestly, when I hear his name I think of Jackie Gleason’s hapless foil on The Honeymooners.
This film was clearly a work of great passion for Norton, as screenwriter, producer, director and leading male actor. A very smart Yale graduate with seemingly boundless famous friends and his own multiple talents, Norton managed in Motherless Brooklyn to create a 1950s period piece so immersive you can almost smell the cigarette smoke in a jazz club, the stench of the streets in the back alleys of Harlem and the odor of corruption that drives the plot of this film.
Norton plays Lionel Essrog, a young assistant to private investigator and mentor Frank Minna, played by Bruce Willis. Lionel, also known as “Freakshow” for his particular blend of Tourette’s syndrom with integrated Obsessive Compulsive Disorder, struggles to keep it together, but leverages during investigative work his savant-like ability to totally recall conversations. His ticks and outbursts are a visible and disruptive part of Lionel’s outward demeanor that require repeated explanation throughout the film. I am not convinced that they are a necessary part of the plot but they add an interesting dimension to his character. But it could be that Norton is seeking an Academy Award nomination (which he might win) the way Sean Penn did for I Am Sam (though he did not). There were times when I felt as if a twitch or shout was inserted as if a timer had demanded the audience be reminded of his disorder. But that is also the building nature of his nervous misfire, pent up as pressure rises and particular situations demand its release. The more he attempts to suppress it, the worse it becomes.
Frank Minna gets caught up in a plot by mobster/committeeman Moses Randolph (Alec Baldwin) against a backdrop of scenes reminiscent of Marvel Studio’s portrayal of Hell’s Kitchen. And Baldwin is literally a looming shadowy figure, much like the Wilson Fisk character from the Daredevil series but not as psychopathic. The sets for Motherless Children are seemingly the result of time travel back to the era being portrayed. Not being more familiar with New York handicaps me in fully appreciating the masterful set design details employed at every turn, even down to long streets filled with appropriately classic cars and a believable amount of garbage at the curbs. Of course, you never know what’s been digitally painted into scenes any more.
Minna’s small investigative practice is left to fend for itself following his death early in the film. The goal for Lionel then becomes to solve Frank’s murder, becoming embroiled himself in a dangerous multi-layered mess along the way. The journey spends considerable time in small bars and jazz clubs in the boroughs between several bridges built by Randolph and neighborhoods he is destroying and re-developing without regard for their residents. A subplot involves Randolph’s brilliant engineer brother Paul played by Willem Dafoe with his usual intensity.
One jazz scene is so lovingly filmed, and the audio so enthralling its no wonder the cameras lingered so long on individual musicians. Viewers can almost smell the smoke and taste the whiskey. And behind the scenes, the actual trumpet playing is by jazz great Wynton Marsalis. Singer-songwriter Thom Yorke of Radiohead wrote the song “Daily Battles,” referenced in a line by female lead Laura Rose played by Gugu Mbatha-Raw, “We’ve all got our daily battles.” The line is in response to one in a series of apologies by Lionel for his uncontrollable Turrette’s outbursts.
Dialogue is often overplayed in movies like this one. But Norton writes direct, relaxed exchanges instead of exaggerated lingo of the era. He began writing the adaptation of a Jonathan Lethem novel in 2004 and then hit a writer’s block, got involved in other projects but eventually completed the script and began production. The cinematography by Dick Pope, who worked with Norton on The Illusionist (2006), has a similar rich, personal feel, and the sound track is ripped right out of the 50s with lots of rambling piano and tenor sax.
Watch for multiple Oscar nominations for this film despite its occasional cliches and rambling dialogue. Although a bit long, and despite Alec Baldwin’s performance weakening as the film progresses, it is a very different experience when compared with the many other films premiering this holiday season. You might even find yourself craving a shot of whiskey and a cigarette, preferably in a smoky jazz club, by the time it ends.