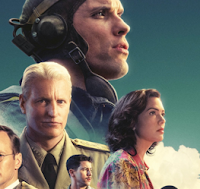 It’s fitting to see a film about a great military event on the eve of Veterans’ Day, and that is no doubt behind the timing of the release date for Midway. I do not want to disrespect the valor and sacrifice behind this actual legendary naval victory. But this is a movie review, and I can’t turn a blind eye to the faults that abound in the movie version.
There are so many fantastic war films, some of them very recent, and also true stories. Saving Private Ryan, Full Metal Jacket, Platoon, The Hurt Locker, Hacksaw Ridge. Sadly, it’s a long list, reflecting the human race’s perennial lust for conflict and battles. So, if you’re going to honor a battle that turned the course of a world war, the film should be great as well. I do not include 1968’s heavily politicized The Green Berets in the list of greats. It was a G-rated, star-studded vehicle for John Wayne to sashay through the jungle saying, “Come on, pilgrim, let’s go find Charlie.” (not a real quote)
And that brings up another point. At this racially divisive time in our history do we need to focus on the characteristics of a people we fought almost eighty years ago, re-illustrating them as barbaric in their intensity and regimented allegiance to their Emperor? Fortunately the makers of Midway chose not to portray the Japanese internment camps established between 1942 and 1945.
In this case, my first thought was that the makers of The Love Boat or Fantasy Island were responsible for casting. You know, the Hollywood stars of the moment assembling en masse to provide that much needed box office boost. Perhaps when you don’t have Robert Mitchum, Charlton Heston and Henry Fonda available as they did in 1976’s version of Midway, you resort to Dennis Quaid, Nick Jonas, Woody Harrelson and a bunch of other familiar faces to lead the charge. But seriously, Woody Harrelson as Chester Nimitz? The admiral has an aircraft carrier named after him, and here we have the star of Zombieland and Cheers being all leader-like with a head full of fake gray hair.
And of course, what cast in the year 2019 would be complete without Mandy Moore heading up a crew of officers’ wives with her now patented soulful frown and pouty persistence, generally in a tasteful nightgown? At least they didn’t have her break into song at the Officers’ Club.
The entire first half hour or more of Midway had me wishing for a note pad to capture examples of the cliché, corny and just plain poorly written dialogue. It verged at times on Mystery Science Theater 3000 level, B-movie commentary. Yes, they were trying to capture the bantering machismo of shipboard sailors and pilots from the 1940s, but I find it hard to believe that they constructed sentences this completely and stupidly. And they didn’t even seem to swear. I insist, if red-spotted Japanese Zeroes were strafing my tail over the Pacific I’d be screaming profanity at the top of my lungs.
Enough about Midway’s failings. If you can overlook the clumsy script, what they got right once they got going was a ton of aerial dog-fighting and dive bombing that keeps you on the seat of your pilot’s chair. The attack on Pearl Harbor is heart wrenching when the Arizona is attacked. Unfortunately it is used as the backdrop for a couple of awkward personnel problems in which a senior officer takes an inexperienced sailor under his wing for the first of several similar encounters.
As a history lesson and some exciting war-action footage Midway entertains and saddens, thrills and disappoints. Closing credits offer glimpses into the final days of several key characters.
An interesting segment showing the impromptu footage captured by filmmaker John Ford illustrates the accidental 16mm filming of the actual attack on Midway island used in a later short documentary.
Midway runs 2 hours 18 minutes and is rated PG-13.
Should I see this movie?