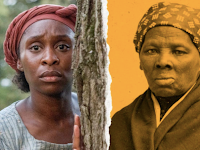 It’s hard to separate the incredible story of Harriet Tubman from the quality of the movie Harriet. This biopic of her life is so amazing as to be unbelievable, but as the film winds down, the factoids begin to roll, and there we see the supporting details. Further research supports the screenplay at every turn. The writers adhered scrupulously to Tubman’s biography. She was born Araminta Ross, called Minty until she adopted her mother’s first name and husband’s last name, combining them into Harriet Tubman when asked what she would like to be called as a freed slave. Following a virtually impossible solo escape from Maryland to Pennsylvania, on foot and being pursued by slave owners and bloodhounds, Tubman arrives in Philadelphia a free woman at the end of a one hundred mile trek.
But that’s where the story becomes astonishing. She made thirteen additional trips back to rescue seventy additional slaves and family members and became a prominent “conductor” on the Underground Railroad network of safe houses. She also helped abolitionist John Brown recruit men for his raid on Harpers Ferry and served as a scout and spy for the Union Army during the Civil War.
A head wound received from a slave owner at age thirteen caused her to suffer from “hypersomnia,” a condition similar to narcolepsy that causes a propensity for falling asleep suddenly and for extended periods. It is also credited with the prophetic visions and dreams that she came to attribute to guidance from God.
The film accurately portrays her use of gospel song as code to communicate her presence to those awaiting rescue. I thought this was absurd until I read that it was a real occurrence. The other source of music in the film, the soundtrack, I felt was overworked, with some sequences seeming somewhat awkward due to their intensity or mismatched use alongside the script. It pulled me out of the film in several cases. Likewise, Janelle Monae’s character (Marie Buchanon) seemed a bit too pretty and polished, and her death scene was unrealistically at the beckoning of Director Kasi Lemmons’ queue. Her role as a black business owner in Philadelphia was invented for the movie.
Similarly, the line spoken by an entrepreneurial black “slave catcher” named Walter who is also something of an opportunist, channels Roy Scheider’s Jaws line when he says, “We’re gonna need a bigger cart.” This was only a little humorous and totally out of place in this film. Other personal interludes, decision points at which slaves decided to be saved, couples reunited or goodbye were said seemed a bit too modern or heavily dialogued. These people would simply be freaking out or speechless from angst.
Harriet Tubman is a major character in U.S. history that has certainly been recognized for her achievements through the years, but in a sort of diminished capacity relative to other figures. For example, in 2016 the U.S. Treasury Secretary announced plans to add a portrait of Tubman to the front of the twenty-dollar bill, moving Andrew Jackson to the back. In 2017 the current Secretary, Steven Mnuchin put the plans on indefinite hold because “right now we have a lot of more important issues to focus on.” Here is a fantastically courageous patriot and freedom fighter being relegated to a back burner rather than “offend” the sensibilities of those who favor a man who initiated the “Trail of Tears” as part of our country’s Native American relocation and concurrent genocide.
Cynthia Erivo did a fantastic job portraying Minty/Harriet. Like Tubman, she is only five feet tall. She recently played alongside Viola Davis in 2018’s Widows.
The film Harriet pales by comparison to other movies on this topic like Twelve Years a Slave. Cicely Tyson played Tubman in the 1978 TV series called A Woman Called Moses.
I recommend that everyone who is considering seeing this film first read Uncle Tom’s Cabin for a rich flavor of the brutality that occurred leading up to the Civil War. Lincoln from 2012 would round out the experience.

Harriet runs 2 hours 5 minutes and is rated PG-13.
Should I see this movie?