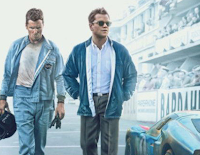 One of my favorite toys as a kid was an Aurora HO scale slot car racing set. The first car I bought was a light blue Ford GT 40 with black racing stripes. Even knowing that the chassis and motors for all subsequent cars were identical, the little Ford seemed to hug the track better and move faster than the rest of my growing collection.
Years later I bought a full scale used 1969 Shelby GT 350. It was brilliant yellow with black racing stripes, a roll bar and a polished wooden steering wheel. As one police officer once commented, “That thing looks like it’s going fast while it’s standing still.” It had a pleasantly growling engine and enough heart-pounding muscle to plaster you in your seat when accelerating hard from a full stop. It was clear how people got hooked on racing the minute the automobile was invented. They raced horses, didn’t they?
Even given my personal history with the Shelby-era Fords, I was unaware of the true story told in Ford v Ferrari. This is the tale of Carroll Shelby and Ken Miles, who against all odds and despite interference from the “suits” within the Ford Motor Company hierarchy, convinced Henry Ford II to give them a chance to try to beat Enzo Ferrari’s team at the French Le Mans 24 hour endurance street race in 1966.
Matt Damon plays the legendary racecar designer, and Christian Bale as the first driver ever to win the Daytona, Sebring and Le Mans in one year. Or did he? Therein lies an additional chapter within this exciting racing story.
It should be noted that the theater at Saturday night’s showing of this newly released film was packed with moviegoers. This was a surprise, since we are often literally the only two people in this venue regardless of the time or day of the week. As a result we wound up in the fourth row. It’s been years since I’ve sat that close to the screen. For the same effect, if you have a large wall-mounted flat screen TV, sit on the floor about three feet in front of it, looking upward, and turn the volume to eleven. It was kind of immersive, though something of an actual pain in the neck. But for a car racing movie? We felt as if we were IN the race! I might actually recommend it.
There are a lot of great auto racing films; Grand Prix, Le Mans, Winning, Days of Thunder and the Fast and Furious franchise among them. I think this film will join those ranks. The camera work was stunning, at fender level and moving 200 mph. There are lots of gear shifting, clutch and gas pedal shots, plus a tight interior head shot of Bale as he alternately focuses and makes animated faces at events around him. His exclamations add interesting color commentary to the race in progress. There are several crashes filmed seemingly from the midst of the exploding vehicles.
But as fun as the racing becomes, grueling 24-hour ordeals in the rain and dark at times, this is a human story. Henry Ford II, played by Tracy Letts (The Sinner, Lady Bird) is a pompous tyro seeking only to live up to his grandfather’s reputation, and Godfather-like Enzo Ferrari (Remo Girone) keeps taking his lunch money. This plays heavily into Carroll Shelby’s ability to manipulate Ford, whom some call “Deuce,” into granting carte blanche oversight of the Ford team’s development of a Le Mans-worthy vehicle. “Go to war!” Ford tells Shelby. Up until this point, team Ferrari has dominated the French race.
One great scene has Shelby taking the rather rotund Ford for a spin in the newly developed GT racer, a nine million dollar vehicle. If watching Ford being wedged into the little car isn’t funny enough, well, go see the movie for the rest of the ride.
Christian Bale gets to speak in his own Welsh accent in this movie. Though it may be a bit exaggerated and adapted to produce British affects, he does nicely as a bad boy with a heart of gold. His relationships with wife Molly (Caitrona Balfe) and son Peter (Noah Jupe from A Quiet Place) are additional highlights of the story.
When I grew up our family had a Pontiac LeMans. It was pronounced with the “s” as a "z." In the film, they go out of their way to employ the French pronunciation for the race: Le Mon. The course used in the depicted race no longer exists, so Production Designer Francois Audouy recreated the entire track in California, along with the finish line bunker, three stories tall, right down to the pits, grandstands, press box and even doorknobs imported from France. This was a big budget old time Hollywood production at a cost of 100 million dollars.
Damon and Bale bring the Shelby/Miles relationship to life at it’s male-bonding best. There’s as much fuel in these two as in the cars they push to their limits. The vehicles take on a life of their own through Miles’ eyes, as creatures that must be treated lovingly and respectfully in the quest for the driver’s “perfect lap.”
You’ll want to leap into your car after you leave the theater (I can’t) and leave the parking lot at 200 miles per hour. (Don’t.) But do rush to see this film up close and on the big screen with a theater crowded with racing fans and lovers of great movies. It’s a great ride.

Ford v Ferrari runs 2 hours 32 minutes and is rated PG-13.
Should I see this movie?