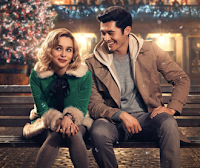 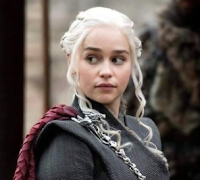 You probably know Emilia Clarke as Daenerys Targaryen from Game of Thrones, but her role in Last Christmas is more reminiscent of her character Lou Clark in Me Before You, a sappy but engaging 2016 chick flick that seems custom made for the Hallmark channel.
Here we have Clarke playing Kate, a somewhat self-sabotaging Christmas shop elf who keeps bumping into the mysterious Tom Webster, a strangely genteel suitor played by Henry Golding. We know Golding from Crazy Rich Asians as the puzzlingly English/Malaysian charmer who seems not quite Asian and not really British, but of course he is both. Also from CRA is Michelle Yeoh, Kate’s boss and “other dragon mother” who relishes the chance to play a comedic role instead of her usual hard-as-nails Asian matriarch persona.
A movie with a soundtrack entirely based on the music of George Michael was off-putting (for me). The title song has always annoyed me with its pronunciation of “Gave” the way “Have” is spoken. “Last Christmas, I gaaav you my heart.” When the song became a staple of Christmas channel holiday rotations it guaranteed I’d immediately be fiddling with the controls on my car’s stereo. But the number of covers by current artists speaks to its general popularity as a song, and also as a tribute to the talent and complexity of the late Michael.
But unlike other films that have stories scripted around a set of songs, this one nicely fits Michael’s tunes into the plot. The story is adeptly augmented by the soundtrack, not dominated by it.
And Emilia Clarke, with her highly expressive eyebrows, has managed to do the unthinkable. She has dethroned Zooey Deschanel from her long-held status as most adorable female movie elf, based on positivity, charisma and dominance within the script.
Oscar winning actress Emma Thompson wrote the script for Last Christmas. She plays Kate’s Yugoslavian mother, and saved the best comic line in the film for herself. Yes, this is a comedy, but it is also a Christmas story and a love story, filled with joy and it ultimately serves as a surprisingly powerful tearjerker. The film also exposes the ugliness of anti-immigration bigotry through the eyes of its victims. So, there’s a lot more going on in this seemingly simple film than the trailer might indicate.
The words from the Wham hit, Last Christmas take on special significance along Kate’s journey through diverse and Bohemian sections of London. You will be reminded of these words during several poignant scenes. Personally, I may just keep my hands off of the radio next time the song begins to play.
Last Christmas, I gave you my heart
But the very next day you gave it away
This year, to save me from tears
I'll give it to someone special
Once bitten and twice shy
I keep my distance
But you still catch my eye
Tell me, baby
Do you recognize me?
Well, it's been a year
It doesn't surprise me.
Last Christmas is a great way to kick off your holiday season. Just brace yourself for having that song stuck in your head for a while.
Last Christmas (2019) runs 1 hour 43 minutes and is rated pg-13.
Should I see this movie?