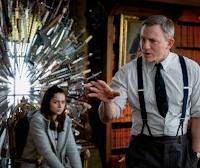 “I suspect…foul play!”
And with that declaration, the death of Harlan Thrombey, family patriarch and uber-famous mystery writer, becomes a mystery unto itself.
Perhaps the best selling author of all time, outsold only by The Bible and Shakespeare might have uttered this line, launching the circuitous murder investigation in Knives Out. Of course, that author would be Agatha Christie, who brought us the sleuthing adventures of Hercule Poirot and Miss Marple.
And in a tip of the hat to whodunit murder mysteries, we briefly see Angela Lansbury onscreen in an episode of the highly successful Murder She Wrote, being watched in the home of the least likely suspect in the Harlan Thrombey murder case. Or is she? The personal nurse to the wealthy 85-year old mystery writer is young Marta Cabrera, from Brazil. Or is it Ecuador? Or is it Uruguay? Or is it Paraguay? Family members have no idea, but they embarrassingly call upon her as exhibit A in their heated discussion of the American immigration controversy. This scene is a transparently modern inter-family squabble like those that may erupt around dinner tables this holiday season.
Cabrera, played by Ana de Armas, is a deer-in-the-headlights unwitting participant in a living game of Clue taking place in the Thrombey family mansion on their Massachusetts estate. Cabrera is also something of a human lie detector, being afflicted with a “regurgitory response to the telling of untruths.” Yes, she reliably vomits when she lies, and this trait plays heavily into investigative queries by both investigators and savvy family members.
Inspector Benoit Blanc, played by Daniel Craig, methodically susses out the truth with his powers of deductive logic and disarming southern drawl. Equal parts of Poriot and Columbo, his accent sets him apart from the rest of the characters and allows for the delivery of lines that pierce through a room full of chatter with a razor sharp intellect dripping in sugary syrup. It’s fun to see Craig in anything but his steely James Bond persona. Here he seems a bit more human and is clearly having more fun.
The cast of characters includes the legendary Christopher Plummer as the family patriarch along with scream-queen icon Jamie Lee Curtis as his eldest child Linda. Her husband, Richard is played by Don Johnson, who has either had a ton of work done or has aged nicely. Toni Colette, Michael Shannon and a handful of other children, grandchildren and spouses round out the dysfunctional family. Captain America’s Chris Evans plays black sheep grandson Ransom Drysdale, whose declared altruism seems out of character for his otherwise cynical and self-serving nature. What is he up to? It seems everyone has motive, circumstantial evidence abounds, and by the end of the movie you’ll have difficulty determining whom you like least. But “Greatnana” (K Callan) holds a special, silent place in the family drama. She’s Harlan’s ancient mother, so old “we don’t even know” her age. You just know she’ll eventually have something to say.
The trailer for Knives Out offers plenty to gain our interest, but does little to give away anything but the most basic plot elements. You will not know, going into this film, what’s coming out the other side. As Inpector Blanc says, “This is not a donut, but a donut hole, and within that hole is another hole that circles a point that outlines another donut, within a hole…” He never completes the confusing metaphor, but it serves to reflect the complexity of the overlapping and interwoven plots. A lurking wagon wheel sculpture of sinister cutlery features prominently throughout the inquisition, and holds a key secret of its own. It will eventually step out front and center.
Director Rian Johnson’s use of 35mm film lends a richness and warmth to scenes that are mostly filmed inside a trophy-laden Victorian house complete with a “trick door” that masks a useful window. His use of handwritten notes and characters on the run has become his standard. He directed Looper, several Breaking Bad episodes and was tapped for a Star Wars trilogy. His writing for this script was heavily influenced by the Agatha Christie murder mysteries.
You’ll find yourself guessing at clues, trying to figure out who was responsible for the “donut hole within the inner donut” and will eventually get some things right and others wrong, much like Blanc’s own journey within the film.
This is a film that must be seen before someone tells you “that one thing” that ruins the inevitable surprises, twists and turns. It is a fun and stimulating entry into the Christmas rush of releases, possibly better suited for Halloween.