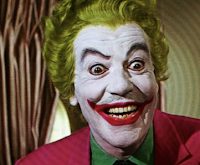 I grew up watching the comic-book-come-to-life Batman show that debuted in 1966. We didn’t even have a color TV at the time, but my mind seems to have filled in the details like the paint-by-number artwork of the same era. It was an outrageously colorful series, both visually and through its campy characters. Caesar Romero played the villainous Joker in that incarnation with a crazy enthusiasm that subsequent actors have been trying to top ever since. 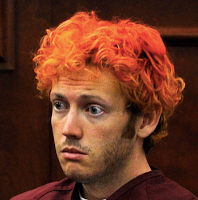 In 2012, a real life Joker entered a movie theater in Aurora, Colorado, killed 12 people and injured scores more in the worse mass shooting since Columbine, sadly in the same state. The Dark Knight Rises was playing that evening, adding a life-imitates-art twist to that tragic event. Ironically, the Joker was not in that film, but the actual lunatic looked more frightening in court than any amount of makeup can convey in a movie about Batman, or one that even slightly overlaps the Batman story in the Gotham City universe.
We all know by now that there is no such thing as bad publicity, so the recent media frenzy and refusal to show the new Joker film just piles dollars onto the box office take, setting records and frightening audiences everywhere. But the sad fact is that mass shootings have frequently taken more lives than in this movie. By my count, the Joker kills eight people in two hours.
Pictured below are the gallery of Jokers: Jack Nicholson, Heath Ledger, Jared Leto and now Joaquin Phoenix. The Internet is ablaze with comparisons and “who’s the best” essays. I won’t judge, since this review is about the 2019 film. 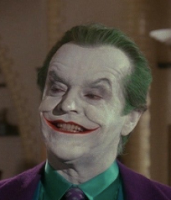 But Phoenix’s portrayal goes far beyond the clown makeup that helps tell this origin story. Set against a timely rich-against-poor backdrop of clown-faced rioters inadvertently inspired by Arthur Fleck (the Joker’s real name) after a subway mugging and triple murder, the Joker eventually becomes a counter culture hero in a city gone mad. His attempt at stand-up comedy is uncomfortably reminiscent of Andy Kaufman’s on stage madness. 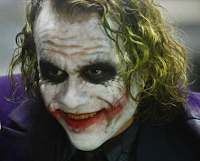 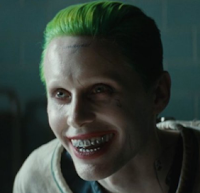 Batman is not in this film. Well, at least not yet. But his father is running for mayor, and Arthur Fleck is convinced that Thomas Wayne is his own father. Layers of pity for Fleck begin to build early on as he is beaten by thugs, abandoned by a therapist and comes to discover his own horrific abuse as a child. He suffers from a condition that causes him to laugh hysterically and inappropriately, and has a history of mental illness in his family.
And perhaps that’s where Joaquin Phoenix triumphs in this role. Jack Nicholson just looks kind of crazy and can summon up “Here’s Johnny” lunacy at will. Heath Ledger took the character much darker, perhaps becoming too involved in the role. Jared Leto complemented the Suicide Squad’s Joker with some actual insanity, but Phoenix makes the character believable. His journey is not so much a descent into madness as an ascent from it, with a couple of lateral moves along the way.
There is another origin story within this one. I won’t spoil it, but let it be known to fans of Batman that, no, there cannot be a Joker movie without Batman. At least not entirely. Director Todd Phillips produced the Hangover trilogy and the recent A Star is Born. Close-ups appear to be a specialty and are entirely effective in this film. 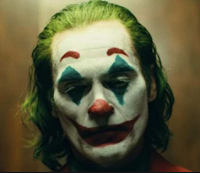 Joaquin Phoenix has done some pretty crazy things off-screen that leave one wondering where the character begins and the actor ends. His real life appearances on Letterman were cringe-worthy, and Robert DeNiro’s Carson-esque late night talk show segment is just shocking. If you’re in the mood for a dark ride, some great acting, and another reason to be afraid of clowns, head out to the theater and see this with a nervous crowd while you have a chance.