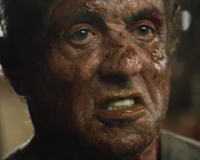 It’s hard to believe that the first appearance of John Rambo in First Blood was 37 years ago. Four more films have been produced, including the current Rambo: Last Blood, and hopefully the franchise can now be put to bed.
I mean, how many times, and for how many reasons can the main character get enraged or freaked out enough to go on a horrific rampage that uses all of his military training in the art of dispensing death? Are his wounds at the end of this film severe enough to kill him, or will he heal for one more round of mayhem?
For a while, Sylvester Stallone seemed intent on creating action heroes with five letter names: Rocky, Cobra, Rambo. Rocky had multiple sequels, as did Rambo, and both franchises hit a formulaic and mostly successful stride. For the record, because I lost touch with several of these, here are the Rambo films in order:
First Blood 1982
Rambo: First Blood Part 2 1985
Rambo III 1988
Rambo 2008
Rambo: Last Blood  2019
As you can see, it’s been a while since the last film, the only one directed by Stallone. He’s had a hand in writing all of them however. The 1980s were generally Rambo territory, when Post-Traumatic Stress Disorder became recognized and came into use as a plot device.
In this latest rampage, John Rambo is living on a farm in Arizona with his niece and her mother. He has constructed a series of tunnels all over the property because “he likes to dig and is crazy” according to his niece Gabrielle (Yvette Monreal). The tunnels become the creepy Viet Nam-like setting for a final battle with crazed Mexican human traffickers later in the film. A lengthy segment has Rambo eagerly preparing booby traps and weaponry for his expected visitors. This is the point at which my wife brilliantly commented on the similarity with Home Alone, and in fact Stallone was asked about this parallel during an interview for IMDB. Others have been producing parodies of Rambo: Home Alone.
Gabrielle, intent on visiting her no-good father in Mexico to find out why he abandoned her, defies John’s request and her mother’s demand that she not try to find him. But her troubled friend has done the research and the temptation is too much to resist. Thus begins the descent into chaos and human trafficking that results in a Rambo killing spree so violent it should probably be rated NC-17. And yes, once again, in the row behind us a family brought kids to see this twisted display of graphic gore and revenge.
Seriously, don’t you want your ten year old to see a living man’s heart cut out of his chest so he can “see my rage and feel the pain in my heart,” according to the “hero” of the film?
Rambo gets even for sure, and of course he saves the best kill for last – the worst bad guy. But this is revenge-porn pure and simple. There is no redeeming value. Rambo’s niece is still dead and John is still severely broken. There is no attempt to revisit the classic line, “They drew first blood,” spoken in 1982. Obviously it made no sense to state that last blood was drawn.
So, enough Sly. Time to move on. It’s admirable that you can handle a role this physical at age 73, but your face looks like molded clay, and your voice is still the comic book Rocky Balboa mouth full of marbles it’s always been. It might be fun if you yell ADRIAN! in the closing credits for each of your films.
Effectively directed and simply written, this blissfully short movie certainly gets the job done. Stallone, for all his questionable acting ability is just right for the role, and delivers short, pithy lines like, “I want them to know death is coming” in just the right threatening, guttural whisper.
So if you really like Stallone and the Rambo series, by all means go see it on the big screen. Otherwise, in the time it takes to travel to and from the theater, buy your snacks and sit through 25 minutes of coming attractions, you could watch it at home twice, alone.
Rambo: Last Blood (2019) runs 1 hour 29 minutes and is rated R.
Should I see this movie?