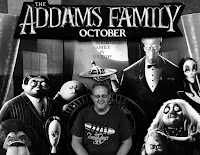 On a dark and stormy night, Gomez and Morticia Addams, fleeing a torch-bearing mob of angry villagers, run over a large straight-jacketed man on a winding mountain road.
“We’ve HIT something!” Gomez proclaims gleefully.
That giant human form is none other than Lurch, escapee from a nearby insane asylum. Taking him along as an adopted butler on their quest for a spooky home of their own, the adventure begins and Lurch is on hand to answer the door with the classic, “You rang?”
“We need to find somewhere horrible to call our own. Someplace corrupt. Where no one in their right mind would want to live!” proclaims Gomez.
A flash of lightning reveals the following road sign: 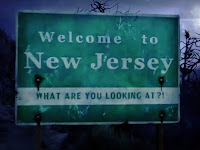 What gives screenwriter Matt Lieberman the right to make fun of New Jersey this way? Well, for one, Westfield, New Jersey was the birthplace of the cartoon’s creator Charles Addams in 1912. The community is now the site of the second annual AddamsFest, expecting 12,000 attendees from 85 towns this October.
Our screening of the latest animated Addams Family film was well attended. It appears the ghoulish cast of characters, originally created in 1938, has retained the appeal brought to life (irony intended) by the 1964 television sitcom starring John Astin and Carolyn Jones. It was a strange time in television history, with the Munsters debuting the same year. The two shows were Halloweenish, macabre fun at its best.
Subsequent films in 1990 (The Addams Family) and 1993 (Addams Family Values) starred the gigantic Ted Cassidy, reprising his original role as Lurch, along with Raul Julia and Angelica Huston as Gomez and Morticia respectively. Over the years, the franchise has spun off various cartoon series, games, movies, television specials and even a live musical production.
While this is perhaps not a compelling story or even a spectacular 3D computer animation, it is a fun feature that introduces a host of other Addams family members, albeit too briefly. All of the regulars are here, nicely voiced by current Hollywood talent, not leastly Charlize Theron (Morticia), who seems able to do just about anything, and is proving it with her most recent half dozen spectrum-wide assignments.
The Addams clan settles happily into their abandoned insane asylum, a decrepit, castle-like structure on a hill overlooking a planned community known as Assimilation, being hyped for imminent sale by big-haired reality TV personality Margaux Needler. When the surrounding swamp is drained, a protective fog evaporates and reveals the distracting house of horrors on the hill nearby. But the Addams’ want nothing more than to be accepted for who they are, as does Needler’s daughter Parker. She and Wednesday Addams strike up a symbiotic friendship, each of them learning about acceptance by emulating the other and rebelling against their respective mothers.
Meanwhile, Pugsley is failing to prepare adequately for the longstanding Addams traditional Mazurka, a sword juggling orchestrated performance that the entire Addams extended family has arrived to witness. Queue another rock-hurling mob action, this one prompted by social media savvy Ms. Needler from her subterranean surveillance lair, and Pugsley proves to have a very particular and useful set of skills. Even the spirit of the Addams house returns following a makeover that leaves it looking a bit too pastel and pretty.
Lurch is given several nice solos on pipe organ, piano, and of course harpsichord. Thing is on hand (pun definitely intended) to encourage the selection of tunes for the opening and closing sequences. And here I have to say was the highlight of the film at our viewing. When Lurch played the well-known Addams Family theme (They’re creepy and they’re kooky…) our entire audience began snapping their fingers in unison at the appropriate spots in the song. It was like a ghastly campfire sing-along, with laughter instead of singing, and a finger-snapping good time.
So gather with your shawl on,
A broomstick you can crawl on,
You’ll want to pay a call on…the Addams Family!
SNAP! SNAP!