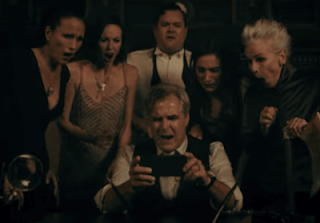 “You think because it’s your family, it must be normal.”
So says Alex, handcuffed to a bed and threatening to kill his mother if anything happens to his new wife, who was married into the family just hours ago.
Welcome to game night with the Le Domas clan, heirs to the Le Domas gaming “dominion” as they prefer it to be called. That is about all Alex (Mark O’Brien) tells his new bride Grace (Samara Weaving), a pretty little thing who’s a bit crude and not at all what Aunt Helene would welcome into the family. Of course, Helene is a broadax-wielding psychopath with a gelled up Guy Fieri haircut, black devil eyes and a penchant for killing houseguests before sunrise. They resemble the Adams Family in family portraits.
Parents Tony and Becky Le Domas (Henry Czerny and Andie McDowell) have been dutifully performing a ritual since grandpa Victor Le Domas made a deal with the devil back in the old days. As a result, on wedding nights, brides must draw a card from a small, mystical black box imbued with magical directives from Mr. Le Bail, the benefactor of the family fortune, or maybe the Devil’s henchman. They’ve all done it, but rarely does the card “Hide and Seek” get drawn. And that is the game that must be played to be accepted as part of the family. But this particular game, unlike Old Maid, checkers or a variety of others, has a sinister twist. The bride needs to stay alive until dawn to win, and that’s what everyone is trying to prevent. They have a vampire-like fear of sunrise that motivates all kinds of awful behavior. Kill the bride or die, and the chase is on.
This is a macabre but deliciously dark comedy with lots of gore and a very modern feel. When folks get upset, they curse honestly and vociferously like the foulest among us. Weaving does a great job of acting terrified, and summons adrenaline-fueled fighting instincts to avoid her doom. Along the way, three family maids who dress like the guitar strumming, black mini-skirted girls in the Robert Palmer “Simply Irresistible” music video, are summarily dispatched by crossbow, gun or silent butler. They wind up in the barn at the bottom of a goat disposal well. Yes, goats have been periodically sacrificed by this Pagan, no, make it Satan-worshipping, clan.
Ready Or Not seems to borrow from the twisted and dark intensity of the recent movie Get Out. The ritual and deeply committed allegiance to family secrets feels familiar in that regard. Narrow escapes, failed attempts to flee and tons of blood and gore heighten the tension and keep it maxed out from start to finish.
Samara Weaving had a part in Three Billboards Outside Ebbing Missouri, and a lead role in The Babysitter, another bloody and darkly humorous thriller that was completely underrated and very worth seeing. Her face is a cross between Emma Stone and Nicole Kidman, with a devilish toothy grin that serves her well in this role.
Adam Brody, as Alex’s brother Daniel walks the line between obedient son and disenfranchised ritual resistor. He wants to help Grace, but needs to tow the family line. He’s familiar from his recent work in Shazam!
Despite Andie MacDowell’s busy portfolio, we can’t recall seeing much of her lately. And Director Matt Bettinelli-Olpin, more often actor than Director, has made a successful move behind the camera for this release. Once again, a horror film has debuted a month or more early for the Halloween season. According to one industry expert, this results from competition for media buys. The number of horror films being released during peak periods can make it hard to raise awareness, to stand out from the crowd, for a particular film. August is also considered a “dumping ground” for questionable films. Hitting the big screen before kids go back to school and when vacations are over is a balancing act. As with many things, timing is everything. And the bottom line goal is to fill screens, get people in the door and at the concessions stands. In our area, we have one theater with 16 screens. The only other options require a 30-45 minute drive.
This is literally a dark ride. Once the wedding sequence ends and the game begins, the Le Domas mansion is plunged into deliberate darkness and “The Hide and Seek Song” is played on an old Victrola. Like any good mansion from the late 1800s, there’s a trophy and vintage weapons room and lots of hidden servant passages, a great vehicle for sudden appearances or sneaking up behind an intended victim. The lighting is subdued and warm, not that fake blue darkness often seen in “night” filming.
If you can handle the violence, gore and profanity, this is a fun and effective hour and a half. Just about the right length to get you home in time for a family dinner. Because well, you know, everything that happens there is…normal.