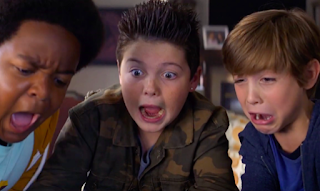 If you’re a fan of Director John Hughes, in particular Ferris Bueller’s Day Off, or Paul Brickman’s Risky Business you may find moments that feel vaguely familiar in Good Boys. This is a coming of age film for friends Lucas, Max and Thor who are entering the social minefield known as sixth grade. So they may have one or two more coming of age periods yet to traverse.
I should warn you at this point that any comparisons to the classic films I just mentioned will set you up for disappointment. I can’t say that this movie is even as good as 2007’s Superbad, which succeeded on the strength of Jonah Hill and Michael Cera in lead roles and Seth Rogan contributing to both acting and writing.
Hill and Rogan have stepped into Executive Producer and Producer roles respectively for Good Boys. Younger actors with equally foul mouths now journey through a simple plot that has them learning to kiss for their “cool kid” friend Soren’s party with the aid of a highly forbidden drone Max’s Dad uses for work. They are caught spying on two “old girls” who capture the drone and must then trade it for the girls’ club drugs the boys grabbed as they fled.
Previews for Good Boys have been playing for months. As with the recent release of Stuber, many of the funniest lines populated the trailer. Also as was the case with Stuber, some of those lines were never used in the final cut. But Good Boys lacked comparable replacements, which weakened the product that was released to theaters.
From start to finish, this is a showcase for obscene sight gags and tons of vocabulary humor appropriate to eleven year olds, much of it profane. Thor claims that he has become a “Social Piranha” following several embarrassing events. The discovery of a parental treasure trove of sex toys is fodder for gags (pun intended) throughout the film.
As sophisticated as today’s tweens have become, I felt that the main characters were somewhat naïve for their age. But they fell at different points on a spectrum that eventually breaks up “The Bean Bag Boys” as they’ve called themselves to this point. It’s somewhat heartbreaking to see them realize that a chapter is turning, and Lucas (Keith L. Williams), for one, is “not going there.” In fact, he joins a school group called SCAB – School Coalition Against Bullying – where he can police the kind of bad behavior he’s personally incapable of. His performance is endearing, and his parents’ divorce becomes a mirror for his own growth and resulting need of a larger “hermit crab shell.” His screams when startled are ear-piercing notes that would do Minnie Riperton proud.
The eventual scramble to return the drone to its prominent resting place is the scene reminiscent of Risky Business. And several moments in the film had me longing for a John Hughes festival. The improbable journey through all too familiar suburbia had a “Twist and Shout” feel that this go-round culminated in Thor’s performance in the “Rock of Ages” school musical.
There are a number of side-splitting laughs spaced evenly through the film, with many chuckles and groans. Hill and Rogan are clearly penis-obsessed at the level of 14 year olds. If you’re not convinced, see Sausage Party. Camera angles and effective editing contribute significantly to scenes like a mad dash on foot across an eight-lane expressway.
Fans of Stephen Merchant (Extras, The Ricky Gervais Show, The Office) will enjoy his portrayal of a nerd in search of a prized gaming card. He comes away instead with something extra special from Max’s parents’ collection.
While I would recommend seeing Good Boys, the big screen adds nothing to the experience. You can wait to see this one at home.