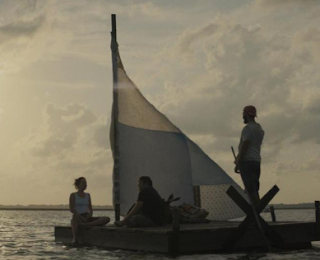 Sometimes we go to school for our education. Other times life tosses learning opportunities right in our path and hopes we do more than stumble over them. But we all take turns as student and teacher, and ultimately we choose whether to learn from life’s lessons or to simply become the victim of them. There’s a lot to learn from The Peanut Butter Falcon, a surprising little film that Mark Twain might enjoy. Judging by the applause from the small audience we joined, this film works at a personal and emotional level. Or perhaps we just sat with a really good group of people late on a Sunday evening.
There are more than passing similarities to “Huckleberry Finn” at work here. This is a modern buddy story with an unlikely pairing of two outcasts on the lam, each with their own destination, a raft and a bond that strengthens along their journey.
Bruce Dern is showing up in movies a lot lately. He has settled into his old age nicely, playing edgy characters with wild gray hair in over twenty roles since the beginning of last year. Here he is Carl, the nursing home roommate to twenty-two year old Zak, an aspiring professional wrestler who happens to have Down syndrome. Identified as a flight risk by his caseworker Eleanor (Dakota Johnson) following several botched escape attempts, he eventually succeeds with a little help from Carl.
Thus begins Zak’s quest to attend a wrestling school somewhere near the Outer Banks of North Carolina. Professional wrestler and pitchman “The Saltwater Redneck,” played by Thomas Hayden Church, is Zak’s hero. Church is a familiar face from TV (Cheers, Wings), with a career going back to the late 1980s. His role in Sideways appears to be his segue into a film career that’s kept him busy since 2004.
Newcomer Zach Gottsagen becomes “The Peanut Butter Falcon,” an alter ego wrestler identity that evolves around a beach bonfire with the help of some moonshine and his new mentor Tyler (Shia LaBeouf.) Tyler’s struggle to support himself as a crab fisherman is hampered by his guilt over an auto accident that killed his beloved older brother. Although not directly resolved, Zak may be the surrogate brother he needs to begin healing that wound. Along the way, he teaches Zak to swim and shoot a gun, provides some frolicking training and saves his life while crossing a river. Redemption is complicated with their pursuit by two vengeful fishermen and Zak’s caseworker, all of whom eventual catch up with the two outlaws.
Shia LaBoeuf, best known for his Transformer series, Disturbia and early work for The Disney Channel’s Even Stevens (and some outrageous behavior around 2008) is at the top of his game in this film. At age 33, he’s got a long career ahead of him. As Tyler, he shows heart, vulnerability and strength. His is a hard-won cunning earned on the Carolina backwaters with a skiff and stolen crab pots. His innate wisdom reveals that there’s a lot more to this scruffy mongrel than meets the eye. He eventually helps Zak to fulfill his dream and wins the attention of Eleanor, who reluctantly joins them on their journey. She tackles her own disillusionment with a health care system that left Zak dumped by his family in a nursing home without rights, dignity or concern about what he wants from life.
Eventually, the initial adventure ends as a new one begins, and the three become a family of sorts, learning from each other as they head off together to Florida.
The cast, locations and music in The Peanut Butter Falcon are sweaty, salty and deeply Southern, reminiscent of Deliverance, Southern Comfort or O Brother Where Art Thou. The topic of Down syndrome is handled frankly, at times in Zak’s own words, and at others with comeuppance for those who utter the word “retard.” Zak’s limitations are less a hindrance than a springboard to his unique effect on those who open their hearts to him. His honesty and genuineness are keys to expediting that process.
This is a very different feel good movie. Retaining the PG-13 rating despite some profanity will be important in reaching a wider audience. Parents should bring kids to see this one. It’s a good catalyst for continued conversation about potentially uncomfortable interactions with those who seem different. And rest assured we are all different, each in our own way.
The Peanut Butter Falcon (2019) runs 1 hour, 33 minutes and is rated PG-13.
Should I see this movie?