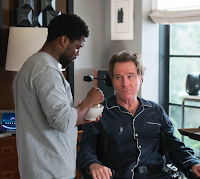 I’ll be sensitive to the need for spoiler alerts in this review since The Upside made its debut in theaters very recently. I won’t reveal anything that isn’t in the trailer.
First, a word about trailers. So many previews of late reveal so much about the plot of the movies being promoted, along with key lines and funniest gags that it isn’t really necessary to see the full length feature. I worried that this trailer might suffer from yet another case of broadcasting the punch lines.
Not so with The Upside. It’s been years since I’ve heard an audience respond to a film so boisterously, heartily laughing out loud to the point at which other lines are so obscured I may need to see the movie a second time. In an era when the acronym LOL is so ubiquitous as to be annoying, you’ll find yourself literally laughing out loud.
The odd couple starring in this film – Bryan Cranston and Kevin Hart – work surprisingly well as a comic duo. Even Nicole Kidman seems to enjoy subjugating her considerable talent as a subdued but powerful third leg in the onscreen relationship. It’s an achievement in itself to have these actors in a PG-13 rated film.
By now we should be used to comedians demonstrating competent dramatic acting skill. Michael Keaton’s evolution from Mr. Mom to Batman comes to mind. And dramatic actors are more frequently expanding their portfolios with comic roles. But who would ever have imagined Walter White in episode one of Breaking Bad, having just dissolved a human body in a bathtub, ever taking on a comic role? (In fact, that scene was darkly humorous if you weren’t too grossed out.) Yet the character he plays in The Upside, Philip Lacasse, has serious dramatic screen time as Hart’s comic foil. And he gets to deliver his share of not-so-subtle, snide and hilarious remarks - without the aid of arms or legs.
It helps to know that The Upside is based on a true story. Otherwise, it has potential to seem ludicrously contrived. Anyone who has spent even a few moments with someone paralyzed from the neck down will appreciate the sensitivity with which Cranston’s limitations are portrayed. Enter Julianna Margulies in a cringe-worthy scene I won’t reveal further. The catheter sequence aluded to in the trailer on its own makes the movie worth the price of admission. Kudos to Hart for playing it straight. I’m sure there’s a substantial blooper reel somewhere.
If you need to check my references, this is the funniest movie I’ve seen since Game Night. It is the best unexpected comic pairing since DeNiro and Stiller. And if you’re feeling, as I do, that we could all use a good laugh right about now, see The Upside before someone ruins it for you. You know those people: “Oh, let me just tell you this one thing…”
Despite early reviews to the contrary, I highly recommend this joyride of a movie. Can you recall the last time a theater audience applauded at the end of a film?